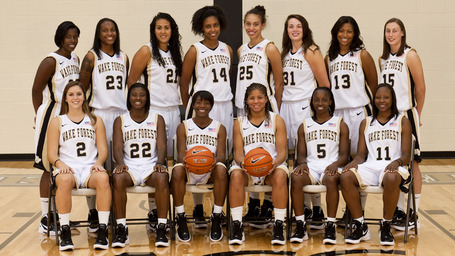 Tonight marks one of the bigger games in Wake Forest Women's Basketball history, as the Deacs try to get a win that could push them over the hump to get their second NCAA Tournament bid in school history.

Georgia Tech comes into the game with an 18-7 (8-4 record in the ACC), as well as a No. 20/22 ranking in the country depending on what poll you look at. The Yellow Jackets have won five out of their last six games in the ACC, including an impressive 56-54 win @ No.23 UNC last weekend.

Wake Forest has a 15-10 record ( 5-7 in the Atlantic Coast Conference) and had a big win over N.C State in front of a sold out crowd in Reynolds Coliseum. If the Deacs can win tonight then it would push their winning streak to four games, and give them that win that they need to look good in the eyes of the NCAA Tournament committee.

I am biased since I cover the Deacs for the Old Gold and Black, but honestly the Deacs are very fun to watch. For those of you that haven't seen a game, Coach Petersen stresses a constant pressing, high tempo ballgame. Not only do the Deacs get up and down the floor, they also force turnovers at a very high rate and score a high percentage of their points in transition.

For those people out there complaining about the lack of a basketball team on campus, I highly encourage you to get out there tonight, wear pink for the Play4Kay game (to support breast cancer), and cheer on your Deacs as they continue their hot play.

More analysis on Georgia Tech after the jump.

Everything for Georgia Tech really starts inside with Sasha Goodlett. She leads the Yellow Jackets in points (15.4 PPG), rebounds (7.5 RPG), and blocks (38 on the year). In talking with Coach Petersen this week it led me to believe that we will try to shut Goodlett down using the same strategy that was used on Preseason All-American Cierra Bravard from Florida State. The constant double teams and pressure down low frustrated Bravard all night and led to a big Deacs victory in Winston-Salem last week.

The Deacs will attempt to ride Chelsea Douglas' hot play from over the weekend. The super sophomore chipped in a career high 21 points (breaking her 20 against Minnesota earlier this season), and also pulled down a career high six rebounds.

Since the Deacs rely heavily on depth, the mini-explosion by sharpshooter Erin Hall in Raleigh was a welcome sight. The addition of Hall and Millesa Calicott has given the Deacs a burst off of the bench that will stretch the opposing defense to guard the perimeter. That has allowed Lindsy Wright and Sandra Garcia to battle down low, get points, and really get on the glass.

In the first meeting of the season in Atlanta, the Deacs battled hard, but ultimately feel 71-67. In that game Lakevia Boykin led the Deacs with 14 points, but the downfall was allowing Tyaunna Marshall and the aforementioned Sasha Goodlett to dominate the points and the boards.

Wake actually won the rebounding battle in that game, but allowed the Yellow Jackets to get to the free throw line 17 more times (27-10).

Tonight is also the annual Play4Kay game, during which the Wake Forest Sports Department will be auctioning off several item/experiences to raise money for breast cancer and general cancer awareness. Some of the items up for bid include a lunch with Coach Petersen, and a guest coaching experience (the same one that Rob and I partook in last night for the men's team).

Overall the Deacs stand a great chance at getting a season defining victory, and they deserve the crowd there to support them. Needless to say, most games do not have a lot of people there and it would mean a lot to the players if there were a high contingency of loud fans out there for the big game tonight. Coach Petersen and his squad deserve it after the way they have battled this season.