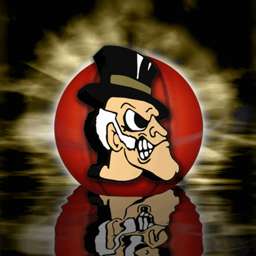 On Tuesday night a few writers got the chance to see Codi Miller-McIntyre and Andre Washington play for Hargrave Military Academy in Greensboro. We wrote some stuff about them and gave a brief projection of where we saw them next year and in the future for the Deacs. Obviously, we do not have resources or the means to see Devin Thomas and Tyler Cavanaugh play since they are a little farther north than Winston-Salem, but thanks to the internet and social media, we can still keep tabs on them.

This article is the second part of a three part series on our "Super Six" recruiting class and will focus on Devin Thomas and Tyler Cavanaugh. Both of these guys will be integral parts to our team next year because of their height and ability to rebound and play inside. Hopefully after reading the article, Wake fans will have a better idea of what to expect from Thomas and Cavanaugh next year in the Old Gold and Black. Enjoy! 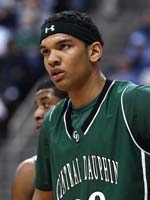 Brief Highlights of Devin and Interview

EAST
Devin Thomas, Central Dauphin (Harrisburg, Pa.) The 6-foot-9 senior and Wake Forest recruit had double-doubles on back-to-back nights as the unbeaten Rams (7-0) won a four-team local holiday tournament. In a 59-52 overtime win over Souderton (Souderton, Pa.), Thomas scored 31 points and collected 22 rebounds. The next night, he scored 19 points and had 10 rebounds in a 52-48 victory over Norristown (Norristown, Pa.). He also totaled eight blocked shots in the two wins. Thomas was selected a tournament MVP for the second time in three weeks. He averages 21.3 points, 12.6 rebounds and 2.9 blocks this season after earning all-state honors as a junior.

RN: What made you choose Wake Forest over Penn State, Temple, Marquette, and Virginia Tech?
Thomas: They showed the most interest in and I love the coaching staff and players down there. Also, I felt like it was the best opportunity for me.

RN: Do you have any goals for yourself at Wake Forest?
Thomas: I’m a team player so the goals I have set is winning everything you can possibly win at the college level as a team. I’ll let my individual play take care of

A fluid big who can run the floor in transition or work the low blocks with equal aplomb, Devin Thomas last season posted terrific numbers (21.4 ppg, 12.2 rpg, 2.9 bpg) for a CD club (20-7) that finished fifth in the 3-AAAA playoffs and reached the opening round of the state tournament.

Those numbers combined with his sparkling yet powerful all-around play landed him a first-team nod on the all-state contingent selected by a panel of Pennsylvania sportswriters. He also was chosen to The Patriot-News' Big 15 team.

When Devin Thomas comes in to Winston-Salem next year he will look to bring a toughness on the boards that the team desperately needs. Thomas has been dominant at Central Dauphin High School, having stretches of absolute brilliance while leading his team to the #6 ranking in the state of Pennsylvania. Since signing with Wake Forest, Devin has shot up many recruiting lists (including Bob Gibbons), and has continued to grow into what is now a 6'9", 235 player. This size inside, as well has his love for hitting the boards, will be perfect for Wake Forest in the 2012 season, as well as beyond.

I would project him to start at the 4 almost immediately if he can translate his rebounding and post play from high school to D1 basketball. That is a big "if", but the starting spot is definitely up for grabs, and it would surprise me if he is not in our starting lineup by the time ACC play rolls around. Throwing him in there at the 4 with CMM, CJ, Travis, and Carson around him will make up for a lot of the deficiencies that we currently have. 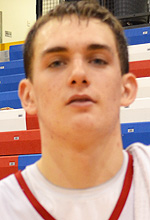 What’s appealing about Cavanaugh is his willingness to work and his versatility. McKenney describes him as a "6-foot-8 kid with point guard skills" who is bright, ambitious and amenable to coaching suggestions. Cavanaugh led the Red Rams in 3-point shooting at 41 percent last season, despite what McKenney said was a miserable start shooting the ball. He will be used, at times this season, to bring the ball upcourt.

He can play a variety of positions, though his current size and offensive game -- with his ability to sink mid-range jumpers and attack the basket off the dribble -- is probably best suited to small forward. And he has worked diligently with J-D athletic trainer Dave Schultz to add bulk to his reedy, rangy body. Cavanaugh said he’s gained about 10 pounds of muscle over the summer to fill out to about 225 pounds.

Cavanaugh said he liked the intimacy of the Wake campus. He spent time with Demon Deacon players and felt as if he were visiting with family. He met the athletic director and the strength and conditioning coach. And he believed, he said, that Wake viewed him as a valuable piece in its restructuring puzzle.

"Coach Bzdelik was thrilled," Cavanaugh said. "He really wanted me. He told me that I was his guy and that he believed in me."

Tyler Cavanaugh will bring great coverage and versatility to our 3 and 4 positions for the next four years. He has a great basketball IQ and can pass the ball with great skill for a bigger man. When you surround him with the good passers for their position that are already here (Fischer and Desrosiers), as well as the versatility that others will bring (Rountree, CMM), I think that Cavanaugh will thrive in the system here.

It seems like Tyler fits right in with the plan that Coach Bzdelik is building for the future. There will be good passers at every position, and nearly everybody is versatile and can handle the ball. His free throws seem to have great form, and he drained them at will in the highlight video. I don't think that Tyler is as ready to start in college like Thomas and CMM are, but he will be a great asset in terms of depth to bring off of the bench. When you add him in there with Thomas, Green, Carson, Andre, and at times Travis, our frontcourt should be much better than it has been in the past couple of years.