Quinshad Davis Commits to UNC over Wake Forest and Tennessee

Share All sharing options for: Quinshad Davis Commits to UNC over Wake Forest and Tennessee 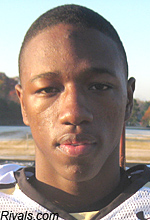 Quinshad Davis, the second best recruit in South Carolina according to Rivals, has committed to the University of North Carolina, announcing the news on National Signing Day 2012. Davis, who played for Gaffney High School, chose UNC over Wake and Tennessee.

Despite Wake Forest being on Davis from day one, and making him a huge priority under the watchful eye of Lonnie Galloway, Davis chose to take I-40 an hour east and become a Tar Heel.

Davis was the 34th-highest wide receiver in the Rivals rankings. Wake was hoping to land Davis to bolster a Wake receiving corps which loses junior Chris Givens to the NFL Draft and senior Terence Davis to graduation.

Davis would have been a great addition to the 2012 recruiting class for the Demon Deacons, currently ranked 71st in the most recent Scout rankings.

Follow all the National Signing Day news at the official BSD thread, here.