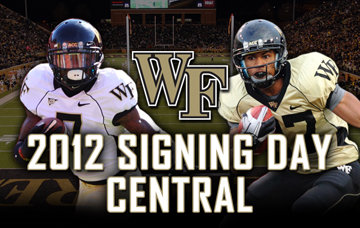 Tomorrow (or really today) is one of the biggest days, if not THE biggest day for most college football teams in the NCAA, and Wake Forest is certainly not an exception. It is National Signing Day, the day that all the high school senior recruits across the nation sign their National Letter of Intent to their college. This letter binds the athletes to the school that they commit to, and it becomes a rock hard "commit", rather than just a verbal.

Although the Deacs are not a perennial powerhouse in college football by any means, it is still the day when we get our infusion of talent for the next 4 (and for us mostly 5) years. Therefore it is very important to us here at Blogger So Dear, and the readers to stay on our toes about the team and what is coming!

Throughout the day tomorrow we will have a live open blog all day where all discussion can take place about the commits coming in. We will also be updating it throughout the day with information from a plethora of sites around the web. That means there is no reason for y'all to go anywhere else except here to get your Wake Forest recruiting information. There shouldn't be a lot of surprise for us, but last year we got a couple of last day steals, so you never know.

This article will highlight the (currently) 19 guys that have verballed to us and are expected to sign their LOI with us at some point tomorrow to become Demon Deacons.

It goes without saying that we welcome all of these guys with open arms, because I (and all of us I hope) believe that these young men will be making the best decision of their life. Go Deacs!!!

Click through for a list of the football players expected to sign with the Deacs tomorrow, as well as a couple of other guys that we could land who are deciding tomorrow.

All information that follows is from Rivals.com

Key Notes
BSD Twitter Pages (Live updates all day w/ analysis)
BloggerSoDear
Martin Rickman
BSD_RAJohnston
MBJohnston12
Robert Reinhard
Links to know for tomorrow
Once again, stay tuned to BSD all day tomorrow starting bright and early at 9.00 with the college decision of Jela Duncan. We will have the thread up before then hopefully, because a lot of these guys like to send their LOI's in bright and early!!!