Lady Deacs might be something special so here's a dare, Tie-Dye Nation

How much do you care about the Wake Forest basketball product? I dare you to prove it. Keep reading ... the challenge is at the end.

Share All sharing options for: Lady Deacs might be something special so here's a dare, Tie-Dye Nation

Something happened over at Lawrence Joel Veterans Memorial Coliseum on Saturday that hasn't happened very often in recent years: a Wake Forest basketball team blew out a team it was supposed to blow out. Indeed, after circling around the Buccaneers from Charleston Southern for the first 10 minutes, the Lady Deacons finally attacked and subdued the visitors 77-57. 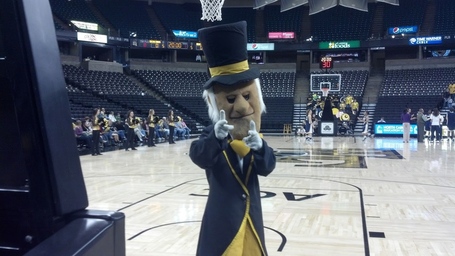 It was quite the tonic, after a brutal week (as in, more brutal than previous brutal weeks) for Wake Forest fans.

I wasn't sure what to expect from the Lady Deacs Saturday afternoon, to be honest. After all, they had recently finished a stretch of five road games that included losses to Kansas, Connecticut, Purdue and Illinois. Of those four, they had a chance to win three, and probably SHOULD have won two. Even more disappointing was the fact that three players (Asia Williams, Lindsy Wright and Mykala Walker) were suspended from the Illinois game for the ubiquitous "violation of team rules." For a team that won 20 games last year, that has to wear on one's psyche. Nevertheless, I was anxious to see how the Lady Deacons responded to adversity.

Needless to say, I came away impressed. Seven Wake Forest players scored at least 8 points and the team out-rebounded the Buccaneers 40-31. Even more impressive was the collective response from Williams and Wright, whose apparent mission was to put their suspensions in the past right from the outset. Williams scored 15 and grabbed 5 rebounds while Wright and her pink high-tops scored 8 and rebounded 9.

I was anxious to find out what had happened to the team that I last saw before their trip to the Virgin Islands. Throughout the two games I'd witnessed, I observed that Wake Forest may have been the quietest team I'd ever seen on the bench or on the floor. On Saturday I sat next to a chatty, cheering group while their teammates on the floor called out screens and switches.

"All of us came out with a lot of intensity, a lot of energy. I think we're finally getting the chemistry that we've been missing," said Wright after the game. "The Virgin Islands was really a wake-up call that if we play right, we can be really good. We're tired of losing and ready to start playing."

Asked if the long trip had made the team better, Asia Williams said, "We've pulled together more as a team. We've gotten better every game."

Added coach Hoover, "I think we grew as a team. We went through a lot of hard times and we were right there in the Purdue game. We were 1 possession away from winning the Kansas game. I think our kids are starting to understand how hard you have to play for how long and how close you have to be and how together we have to be. Really, all of them are talking and saying the right things and kind of figuring that piece out now. If you don't play some of these top teams, then maybe we don't face that until we get to the ACC and we need to learn those lessons now so that when we get to conference it's going to help us."

The other item prompting me to contemplate filing a missing persons report was the running. Lots of running. I mean, when I stepped on to the floor afterwards to take pictures I thought I should be running. I know coach Hoover had told me at least twice about how good this team is in transition. I just hadn't seen it for a full 40 minutes yet. I asked Asia Williams, resplendent in UGGs minutes after the game ended, about what I'd seen.

"We like to get up and down and dictate pace and establish the tempo," Williams said. "I think we play much better when we're running up and down the court."

I agree, and I think the visitors from Charleston would attest as well. Wake Forest turned the Buccaneers over 25 times and tallied 21 assists on eye-popping ball movement that had their opponents scrambling.

I had mentioned to Chelsea Douglas after the game that the Deacs really needed a game like that. She readily agreed, and so did her coach.

"We needed to have a game where not only we beat somebody but feel like we got clicking and things were going really well," Douglas said, "making the extra pass. You know, anytime we have 21 assists that's great basketball for us. We needed a game where we could come out and do this."

Do yourselves a favor. One time. For me.

The Lady Deacons play at 6:30 p.m. ET Tuesday night against Florida A&M, and 2:00 p.m. ET on Saturday against Seton Hall. Tickets are $6. Parking at the Joel is free. FREE! If you're that starved for Deacon success, fight, whoop-ass, whatever, come down. Say 'hi' to me. I sit on the W beside the Wake bench. If you are tired of watching your teams sit idly by as other teams bring the fight and energy, come down to the LJVM this week and watch something different.

No, I don't care that you don't like "girl's basketball." This group has more fight in it than a lot of men's teams (I'm looking at YOU, UCLA) and if you want to spend six bucks to see a team try it's damndest to kick another team's ass, have I got the deal for you.

I don't work for Wake Forest, and I graduated from High Point University. This is an unsolicited challenge for you to put your money where your whine is, and enjoy a couple of hours of true Deacon spirit. See you there.