Exam Week Got You Down? Take a Break With Wake football DB Josh Strickland

John Mundy takes a break from coaching rumors and conference realignment madness to talk to senior defensive back Josh Strickland about life, football and overall randomness.

Share All sharing options for: Exam Week Got You Down? Take a Break With Wake football DB Josh Strickland

Wake Forest football player Josh Strickland may not have been an every down player for the Deacs, but he certainly is the best Deacon Twitter follow (followed closely by Mike Campanaro and Josh Harris).

Like death and taxes, the Twitterverse explodes during exam week with missives like the one above across the country every semester. However, nobody does it quite like Strizzy. Here's another one:

Strickland's exam week torture at "Work Forest" is a source of great amusement for me, mainly because by all accounts he:

If I had to guess which Deacon is most likely to become famous outside of sports, it would be Josh Strickland. He's a nice guy and I would guess marches a little bit to his own drum. His bio says that he is majoring in Communication and Journalism, and I would imagine he will find a happy home in the media world shortly.
So, to break up the monotony of exam week and a week without football, I wanted to share with you some of my various exchanges with Josh Strickland. WARNING: these are random questions. If you are looking for hard-hitting football gossip, go to the Worldwide Leader.
First up, I wanted to know about this apparent Kansas/Kansas City fetish that I see pop up from time to time. I don't know anyone within five states that roots for Kansas University, the Chiefs or Royals except for him.
When I was young, my father moved us out to the Midwest to help expand the Krispy Kreme franchise. We were headquartered in Kansas City. After spending about a decade around such a passionate and rabid fan base, one can't help but become enthralled in everything regarding the Chiefs. From "Red Fridays" to "Chiefs and Chopper," I was born an avid fan. It does expand into the Royals even though their mediocrity knows no bounds. For the Royals, it always seems like next year is THE year. I'll watch every Chiefs game every Sunday, and every Royals game - when they're still relevant, which isn't too long.

That sounds logical. I'd read that his dad had been an instrumental cog in the growth our beloved Krispy Kreme, but didn't know it required relocation. So, I get it. I pressed on:

I told him that my favorite movies of all time were Goodfellas, The Godfather, Die Hard , Friday and Road House. I wondered what his favorite was, putting money on something sophomoric like Dumb and Dumber or Step Brothers.

You can never go wrong with the Goodfellas or either Die Hard, but my all-time favorite HAS to be Tom Hanks' Forrest Gump. I love the history within the film, and how Forrest always finds his way into big, important parts in history, whether that be meeting the Presdient multiple times, playing football at Alabama, serving in the war, or running across the country. Forrest is a character everybody can take something away from. "From that day on, if I was ever going somewhere.... I was running..."

If I had asked him this question during Freshman year, I'd have sent this answer to his teammates so he'd have to endure, "Run, Forrest, run" at every practice for the next four years. Opportunity missed. Moving on, I had to know what was on Forrest Strickland's iPod:

I'd like to consider myself an aficionado of all kinds of music- being a part of a football team; one kind of has to be. If you're looking at my iPod though, you'll find all kinds of assortments of country music. Zac Brown band, Jason Aldean, Luke Bryan, Kenny Chesney, Keith Urban (I can keep going but I'll stop for now). I'd also throw some oldies and soft rock in there as well.

Soft rock? I didn't ask for clarification for fear of hearing the words, "Air Supply" come out of his mouth. 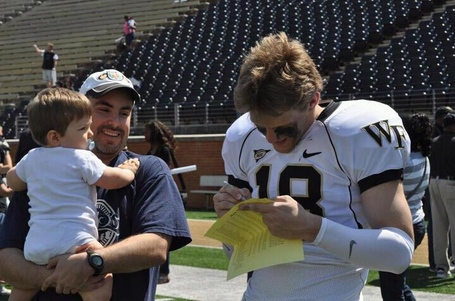 Many people don't know that Josh had the honor of playing basketball and football for current Deacon basketball assistant coach Rusty LaRue in high school. I asked him about that experience:

Rusty is, and will always be, one of my favorite all-time coaches. Having played both basketball and football for him, I feel like I've heard almost all the Rusty stories. I've seen his rings, heard his accomplishments, and even his down moments. I've come to appreciate the competitiveness that resides inside of him, and I feel like some of that has rubbed off on me. I'll never forget our Homecoming game back in high school against North Raleigh. We scored a touchdown on the first play of scrimmage, but had it called back to a block in the back. So what does Rusty do? Calls the same play again - and again we're in the end zone.

TRIVIA TIME: HOW DID RUSTY SCORE HIS FINAL TWO POINTS IN JOEL COLISEUM? PUT YOUR ANSWERS IN THE COMMENTS SECTION BELOW. BONUS POINTS IF YOU TELL ME WHO GOT THE ASSIST.

Finally, one of the best Twitter conversations he and I had was about all the new "special" uniforms that everyone seems to be using. Josh is an artistic kind of guy, and I love his take on the matter:

My my, have uniforms blown up across the country or what? Teams like Oregon and Maryland can trot out there in an entirely different outfit each and every game day. I like the assortment of options, but I feel like some teams are trying too hard to stand out or make a statement these days. Northwestern's new stripes this year? Horrible. I like keeping the uniforms simple, but having a variety of options - if that makes sense.

I'd also love to mention the fact that is seems like every school in the country is trying to add black into their uniform combo - and it doesn't work for everyone. Being a member of the black & gold, I know it looks fly, but some of these schools need to CHILL! It's NOT your color!

I'll leave you with this though, HOW AWESOME would a white helmet with a BLACK WF be?

So there you go. If you're still in the middle of exams, Godspeed.