A look back, and a solution for the future.

Share All sharing options for: Entitlement and the Wake Forest Football Deacons

Like most of us, I watched our debacle against Notre Dame with great interest. Maybe unlike most of us, I lasted about 45 minutes before gaining acceptance of our beloved Deacons' fate and moving on to other games. However, I kept my Twitter feed handy and was a little surprised to glance over and see the following:

It appeared that the former Deacon quarterback and cornerback had engaged in some Twitter discussion regarding the game. It struck me as strange, however, that Skinner was commenting. I've followed him for quite some time and don't recall anything that critical.

At any rate I scooted over to Smith's timeline and saw this collection of Tweets: 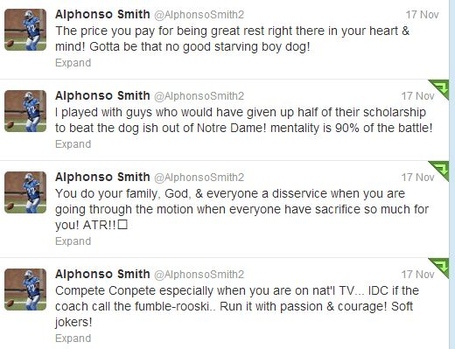 That got me thinking about three things:

A quick search of www.dictionary.com yielded the following definition of the verb, "entitle" :

"To give (a person or thing) a title, right, or claim to something; furnish with grounds for laying claim: His executive position entitled him to certain courtesies rarely accorded others."

A March, 2012 article in The Chronicle for Higher Education titled, "Millennials Are More 'Generation Me' than 'Generation We', Study Finds," cites multiple studies of the Millennial phenomenon. Dr. Jean Twenge, author of Generation Me: Why Today's Young Americans Are More Confident, Assertive, Entitled- and More MIserable Than Ever Before is quoted in the article as saying,

"I see no evidence that today's young people feel much attachment to duty or to group cohesion. Young people have been consistently taught to put their own needs first and to focus on feeling good about themselves."

So if this premise is true, our expectation should be that Jim Grobe's job is to reverse 18 years of human conditioning and instill an unselfish, team-first mindset into enough talented athletes to produce competitive football teams? Really?

To me, there are two ways out of this:

One, you put together enough of a war chest to attract a top tier coach and the top 1% of available athletes to your school. That way, even if the team has the chemistry of Ike and Tina Turner they will still beat Clemson most years on talent alone. Sure, that kind of recruiting raises all kinds of red flags and causes the NCAA to open up branch offices in your area, but what's 3 years probation and loss of scholarships compared to 5 straight bowls and a conference championship?

Or, you can do what Wake Forest used to do. You find the right guys for the right spots, tweak the schemes to fit your personnel and play like your proverbial hair is on fire. Jim Grobe and his staff showed up here in 2001 while the ashes were still smoldering over at the football offices. They simply shrugged, bought some duct tape, and started running an improvised offense that they thought would make them competitive. Competitive? The team finished 6-5 and their opponents hated playing against that junk offense. The next year the Deacs went 7-6, orbit sweeps and all, including their bowl win over Oregon.

Anyone remember that season? That 2002 offensive juggernaut was lead by blue-chippers James MacPherson and the great Jax Landfried. Those guys beat North Carolina 31-0 at home and whipped Purdue in West Lafayette. The turnaround was so stunning that even public address announcer Jeffrey Griffin sassed Carolina as we were leaving the stadium, saying "one more time, just for fun, your final score is Wake Forest 31...North Carolina, ZERO." Four seasons later, and I'm sitting in the end zone at the Orange Bowl Game watching the ACC Football Champion Wake Forest Demon Deacons play Louisville.

Look at the roster from that championship season. Riley Skinner was a freshman. Aaron Curry and Alphonso Smith were sophomores. None of them were 5-star. Most of them were afterthoughts. For 3 years, though, those afterthoughts delivered 3 bowl game appearances, 2 bowl victories and 1 conference championship. My point? Sometimes, less is more.

There is a sign above the entrance to the tunnel that leads to Shields-Watkins Field at Neyland Stadium. It reads, "I Will Give My All for Tennessee Today." Admittedly, not everyone who touches that sign and signs like it across the country gives the effort that the message requests. Let me ask you this: would you be prouder of a Wake Forest Team with 100 4-star recruits with 80 me-first players? Or would you want 100 3-star players that would, to quote Alphonso, "..be that no good starving boy dog."