The View From Section 2: Wake vs Clemson

Armed only with a voice recorder and camera phone, John Mundy provides a fan's perspective of the collective "goings-on" at BB&T field. All views expressed are solely the author's unless they tick someone off. Then it's Rickman's fault.

Share All sharing options for: The View From Section 2: Wake vs Clemson 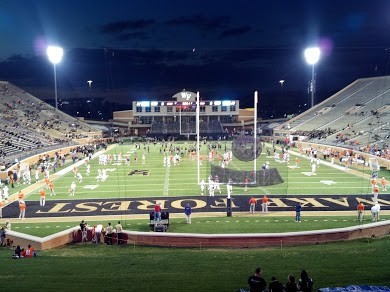 Thursday night. October. The Worldwide Leader. Clemson. As Eddie Murphy's "Buckwheat" character would say, "A'memba dem days?" I sure do, and was very excited for the impending return of All-Universe wideout Michael Campanaro. Surely this was a sign of the Deacons' return to relevance in the football world. In a word, I was really, really, really, really, really hoping that my beloved football team wouldn't implode on national television.

Um. Anyway. Let me show you the View From Section 2:

Again accompanied only by my wingman Heath since the third leg of our stool (and rabid Detroit Tiger fan) had to "work", we cut our workday short and made our way to the tailgating capital of the world. That's right, we went to Five Guys. A quick dinner gave us an hour to build up enough delusion to have a positive attitude. We knew Clemson had an explosive offense and a mediocre-to-terrible defense, but Heath and I both knew that the Deacons would struggle. We just hoped against hope for, well, a break.

We've arrived in the Joel parking lot to check out the tailgating scene. It's a very strong one, indeed. I can only imagine what it'll look like when the Wake fans arrive.

"What the hell is that? Is that an inflatable tiger?"

"Either that or Chester Cheetah"

Me: (runs in direction of aformentioned Tiger/Cheetah) 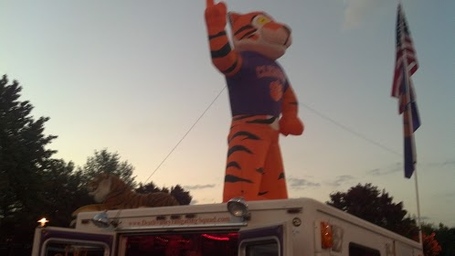 Allow me to introduce you Trip(p?), the owner of the "Death Valley Tailgate Squad" ambulance and his friend John (left). That's right, an ambulance. It's glorious. 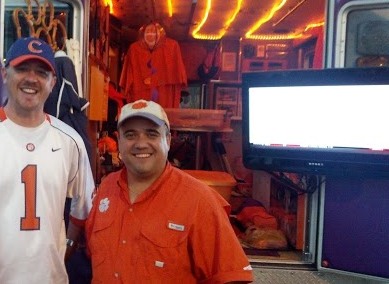 We chatted for a while about tailgating, tradition and other football-related issues until Heath addressed the elephant in the room head on:

"Where does one lay your hands on a used ambulance?"

Apparently the answer is www.ambulancetrader.com, which I thought was a bogus URL until I visited it myself. You, too, can buy a used ambulance and turn it into a tailgating assault vehicle. Just don't do it like they did. The owner apparently purchased the vehicle around 9/11, and found out that it wasn't a good idea for a dark-skinned, thick-drawled South Carolinian to travel to New Jersey on a one-way ticket with a satellite radio in his back pocket. You've been warned. Now, on to the stadium.

A Walk to the Stadium

That muddied audio at the end from Heath is:

Listening to my recorded audio, I believe I'm becoming a bit of a Footballdamus:

Desperation, waxing poetic, and a prediction

"This place has about as much buzz as a Chamber of Commerce meeting." -Heath 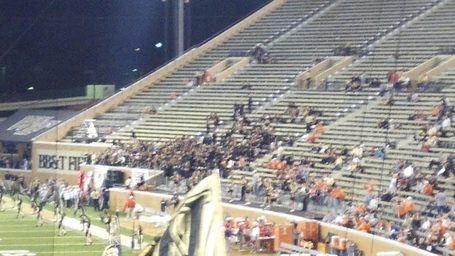 Jeffrey Griffin implores us to welcome our national television audience by getting on our feet and waving our black and gold shakers. Miraculously, all five students currently at the game happily comply. Ugh. Oh, and now we're apparently doing "Sandstorm" a la the University of South Carolina. Is there anyone else's stuff we haven't stolen (cue "Seven Nation Army")?

Tajh Boyd gets sacked on third down, and there is life and hope at BB&T Field.

There is a Tony Stewart sighting in the field level suite on the student side. #WFUSTREETCRED

Wake punts from the Clemson 39. I actually think this is a good call by the coaching staff.

Until now. Sammy Watkins sets up a short Brandon Ford TD after hauling in a 57-yard bomb from the Clemson 33. W-A-O. Wide-Ass-Open. Seven-zip Los Tigres.

"I'm just going to go ahead and say this: the talent level in section 2 is probably the best it's been in a decade." -Me

Maybe the worst offensive play for the Deacs from scrimmage this year. First down, option right, missed block, tipped pitch, out of bounds, twenty yards further from the original line of scrimmage. I may start smoking again tonight.

Now, I've seen the worst defensive play. Watkins goes in from 61 yards as the Deacs watch him like they're watching a highlight video. Footballdamus predicts that the white flag might be making an early appearance. Footballdamus is right.

I'm now blaming my neighbor Brandon in seat 16 for bringing his dad to the game instead of his wife. Like having her here really helped us against Duke.

Brandon suggests the possibility of holding Clemson to a field goal. Heath and I glare at him like he just said "no-hitter" during the World Series. Five seconds later, DeAndre Hopkins hauls in a 12-yard pass from Boyd. Kick good. 28-0. TD attribution goes to "Number double-zero, Brandon."

Ed. Note: I'm aware I missed a touchdown somewhere in there (Sam Cooper, 12 yards from Boyd). It was easy to do. It was that kind of night. Whoops! Missed another one while typing. Someone named Charone Peake catches one from Boyd, who apparently has been made into a Heisman candidate in one half of football.

With 12 seconds remaining in the half, Tommy Bohanon catches a pass from Tanner Price for a Deacon touchdown. The halftime score is now 35-7 and the game is effectively over. My coverage of the actual game will now come to a close. My coverage of the growing resentment and irrational anger emnating from section 2? Yeah, let's focus on that. The final score is irrelevant (42-13).

"It sounds like a study hall in here. A study hall with a PA announcer. 'Katie Smith is working on her biology...'" -Me

Wow, this game is moving at a snail's pace. We need a distraction. How about a tailgating recipe from the Redhead?

Just heard a reference to the Lingerie Football League, and two drunks behind us are now liberally dropping F-bombs. There is still an interminable amount of time left in this game.

I know I said that I wasn't going to cover any more of the game action, but Terence Davis alligator-arms a great pass across the middle from Tanner while in single coverage and no defenders near enough to take his head off. I'm not happy with a lot of the effort out here tonight. Judging from the boos raining down, the remaining faithful aren't happy, either. Shortly thereafter, lone Deacon deep threat Tommy Bohanon scores again. However, Mr. Hedlund misses the extra point, a line drive which we think injured a fan. Welcome to BB&T Field, everyone.

Someone from the general vicinity of the student section jumps out of the stands and onto the field. He evades the athletes, sideline security, then faceplants on Deacon Hill. He recovers, sprints up the hill, hurdles the wall and heads straight for two of WSPD's finest...and shakes them. Outraged? Hardly.

"Get him some spikes!" -Heath

Heath adds some technical expertise to the coverage by defining the "Back shoulder throw":

"It's when the Clemson quarterback sees both of our defensive backs' back shoulders, and he throws the ball."

Dabo inexplicably runs a trick play involving the QB (still Boyd, by the way) walking toward the sideline in mock confusion while the tailback receives the direct snap. The Deacs sniff it out and stick the running back immediately. Heath is rolling now:

"They just trotted out the 'all-day sucker' play and we stopped THAT. THAT'S what we stopped today."

My Theory On Why We Got Pantsed on National TV

Note: If fans of the visiting team that is currently beating you are leaving en masse as well, you're getting your a-double-ess whipped. Thank you.

I'm not providing any analysis here. This space is meant to be a fun look at what occurs during home football games at BB&T Field. When the game itself isn't fun, it's our job as fans to make it fun. So, because the game ceased to be fun REAL early, I recorded the last 15 minutes of real-time audio from our section. What follows is a 6-minute collection of pure audio gold, capturing the mood of a very unhappy (and sometimes inebriated) congregation in section 2. Lest any sensitive souls get their feelings hurt and think we're too harsh, keep in mind that my crew's finest moment was celebrating on the field after beating BC during the championship season. We love our Deacons. But when we pay money for tickets to see the football equivalent of an atomic wedgie, everything is fair game.

Oh, and you're welcome.