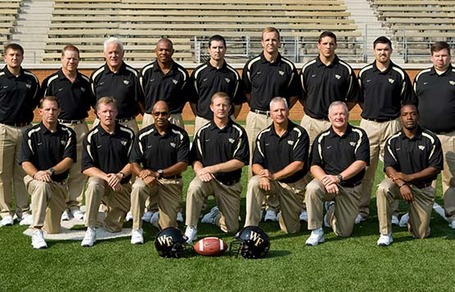 Special teams coordinator Keith Henry and co-defensive coordinator Tim Billings will not return to the staff in 2012.

Henry came to Wake Forest with Grobe in 2001. He joined Grobe’s first coaching staff at Ohio University in 1995. While at Ohio, Henry was the outside linebackers coach for four seasons and spent two years coaching the receivers. During his time at Wake Forest, he has coached cornerbacks and defensive ends. In 2011, Henry was the special teams coordinator.

Billings spent six years at Wake Forest. He coached the wide receivers in 2006 and 2007 before moving to the secondary in 2008. Billings coached the defensive ends in 2010 and the outside linebackers in 2011.

"Keith and Tim have been valuable members of our staff," said Grobe. "We wish them all the best."

There should be plenty of commentary on these "shake-ups", so let's go ahead and talk about this....interesting...move by Coach Grobe and Ron Wellman.