Share All sharing options for: Wake Forest vs. Clemson Preview 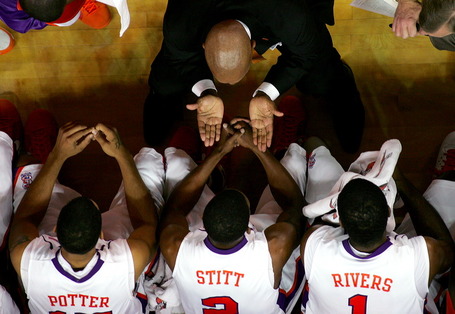 These guys aren't walking through that door.

After the beating that Wake Forest took at home this week to Florida State, the Deacs look to get back on their feet as they travel to Death Valley to face the Clemson Tigers.

Clemson comes into the game with a 10-9 record overall, and 2-3 record in the ACC. They did, however, beat Florida State by 20 in their first ACC game of the year, and just snuck by Georgia Tech this past week.

Most betting sites have Clemson -11.5 (O/U 125.5), but if Ty Walker is healthy (which according to the latest Winston-Salem Journal article is still up in the air) then I would take the Deacs at the line.

Tune in at high noon tomorrow to watch our Deacs take on the Tigers and cheer them on!

More analysis after the jump

In short, it will likely come down to how well Wake Forest can establish their offense against the defense of Clemson. Clemson is above average in defense (52nd overall @ .932 points per possession), and Wake Forest is well below average offensively (214th overall @ .978 points per possession). Obviously everything will change if Ty Walker is not available, even on the offensive end where he is not his strongest. Clemson is a pretty good team defensively, and have done extremely well in the Four Factors excluding eFG% (which they are still above average in). In the conference, the Clemson defense has forced the highest TO Rate @ 25.4% (every 4th possession is a turnover for their opponents). Wake Forest has struggled with protecting the ball as well (22% in-conference, 11th in the ACC).

The Clemson offense vs the Wake Forest defense is a much "better" matchup. Both teams are below average, but are within 10 spots of each other overall. The Tigers offense comes in at 1.004 points per possession (172nd overall), and the Deacons defense is at 1.013 PPP (182nd overall defensively). While the Clemson defense has been very good at forcing turnovers (best in the conference), the Wake Forest defense has been the opposite, forcing a turnover on just 1 out of every 6 opponent possessions (16%, worst in the ACC).

I think it's fair to say that the turnover battle will be one of the biggest factors in this game, especially as far as the Four Factors are concerned.

Here is a look at the Clemson breakdown from Ken Pomeroy:

Overall Clemson has been up and down over the year. They have a couple of nice wins (the aforementioned FSU win by 20, as well as a 16 points win @Iowa in the Big Ten-ACC Challenge), but they also have some really bad losses (Coastal Carolina, College of Charleston, Hawaii, Boston College, South Carolina). This gives me hope that the Deacs will cover the 11.5 spread that bettors have listed.

They rely mostly on junior Milton Jennings when he is in the game (59.7% of minutes played), but other than that they have a balanced attack with what appears to be an 8 man rotation. Freshman Rod Hall has been a nice surprise for Brad Brownell, and has done it in ways that most 6'1 guards don't do it, from within the three point line. If Ty Walker is out, Devin Booker (younger brother of Trevor Booker) will be a force to be reckoned with for Carson and Nikita. He will be hard to keep off the boards as is, but if Walker is out, there could be some big problems for us inside.

I think if the Deacs come out and get into a flow offensively early (which is a HUGE if given the problems on offense recently), then Wake can hang around and make a game out of it. Clemson has shown to be vulnerable to weaker opponents, even at home, so that may give a team in Wake Forest that has actually played pretty well on the road, some hope that they probably shouldn't have.