Share All sharing options for: Preview: Wake vs. Duke

Well guys, I'm a little inspired today, so I decided I'd get to work on a Wake/Duke game preview. I hate to say it, but statistically, we're pretty screwed. Also given the fact that it's at Cameron Indoor, it's even more of a long shot.

Still, we'd be remiss to not talk about it. There are weak spots, even with Duke, and literally nobody is unbeatable. Temple beat Duke earlier this year, and while it was admittedly at Temple, the point is that I can see Wake playing Duke close for sure, and if that was to happen, I'd be absolutely thrilled. The more I think about it in terms of matchups, the more I really think the Deacs could at least make things interesting.

After the jump, I talk stats, matchups, predictions, and even a little bit about how I plan to approach this game..

Alrighty, so first I'm going to post some stats via the wonderful kenpom. Let's make this a game! I won't tell you which team is which (hint: this game is really really easy). 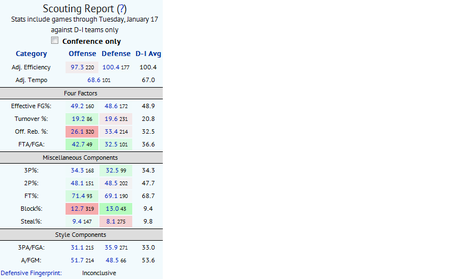 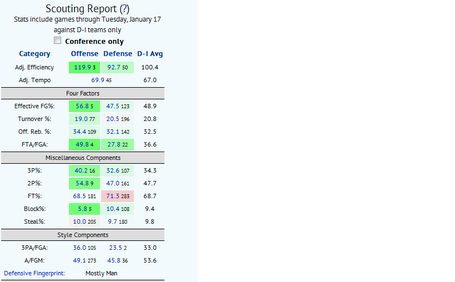 Yeah, see all that green? Duke, statistically, is going to eviscerate us. It's not even a contest. There are other stats I could cap, but honestly they tell exactly the story you'd think they do: Travis McKie and C.J. Harris dominate possessions for Wake, Seth Curry and Austin Rivers especially score in droves for Duke, while Mason Plumlee and Miles Plumlee are fairly dominant rebounding forces, especially as a duo. So where on earth are we supposed to get a prayer in this game? Well, frankly, we probably don't have much of one, but here are some "weaknesses" of this Duke team.

-Wake is actually better at the line than Duke and, if I'm reading my kenpom stats correctly, gets to the line more efficiently (probably more per possession or something) and Wake also sends teams to the line less. It's NOT a drastic difference in any category, but it's there. Of course, Duke's average is brought down by Miles Plumlee, who is shooting only 42.3% from the line this year. Hack-A-Plumlee is honestly going to be a viable strategy for teams against Duke in close games this year. The good news for us is nobody in our rotation, at least those who get plenty of minutes, has a free throw percentage that bad.

-Duke actually has an A:T ratio pretty close to Wake's. Duke is far from impervious to turnovers, which may be helpful in Wake trying to keep in the game.

Also "good" news, most of the guys that played well for Wake in Cameron last year are still here. Travis McKie and C.J. Harris, two of Wake's three double digit scorers in that game, are not only still here, if anything they're playing even better (especially C.J.). By contrast, J.T. Terrell, by all accounts the biggest loss for Wake in the offseason, had a quiet game last year at Duke, with only 4 points on 7 shots, a rebound, 2 assists, and a turnover.

Additionally, Ryan Kelly is the only double digit scorer from last year's meeting that is still on the Duke team. Of course, Duke absolutely reloads, and guys like the Plumlees and Seth Curry are playing better for Duke this year than last. Having said that, it's at least worth noting that with the losses of Kyle Singler and Nolan Smith, Duke did have a major turnover in team dynamic.

The difference of course is that Wake is rebuilding under Jeff Bzdelik, and Duke is shifting with more young All-Americans and being coached by Mike Krzyzewski. We got it handed to us last year, but Singler and Smith both had 20+ point games.

Matchup wise, it's tough to talk about any given pairing without just saying "Duke's better", but I think C.J. matching up with Rivers and/or Curry has the potential to be interesting. The matchup that I'll REALLY be curious about is the new and improved Ty Walker against the Plumlees inside. If Ty can tussle with them with any degree of effectiveness, I'll consider that a pretty big positive.

Ryan Kelly, noted Wake killer, is having a good year again too, and while he's shooting almost 5% worse from the field this year than last year, he's actually doing better from three, which is rather terrifying given how badly he's lit us up the past few years.

We're not gonna win this game. It's not even gonna be a nailbiter. But I can see Wake keeping the margin in the low-to-mid double digits if they play more like the team that beat VT than the team that got destroyed by the Wolfpack, and in Cameron indoor, well, I'll take that to some degree. IT'S NOT GONNA FLY IN THE LONG TERM (sorry for the caps but needed to emphasize, but this year? Eh.

I'm hoping to see some good plays, and that's pretty much it. I'm gonna go out on a limb and say Chase Fischer has a nice game and fills it up a little bit, but Duke ultimately wins 85-70.

As always, comments and similar are appreciated. Go Deacs.