Wake Forest video board to debut on October 8th (vs. FSU)

Share All sharing options for: Wake Forest video board to debut on October 8th (vs. FSU) 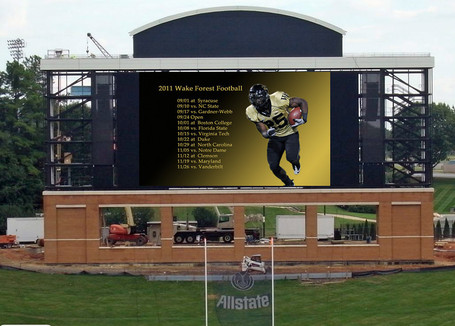 Fans attending Saturday’s home opener at Wake Forest’s BB&T Field will no doubt be impressed with the large structure that has arisen during the off-season in the South End Zone.  However, the new video board is still under construction and will not be utilized until the third home game of the season against Florida State on Oct. 8.

While the structure may look ready, with static signage and advertising panels installed as well as the video board, there is still much work to be done inside the board.  Much of the wiring in still yet to be completed and will take several weeks before the board is fully operational.

"We have always targeted the Florida State game for the debut of the new video board," said Steve Adams, Wake Forest’s assistant athletic director for internal operations.
"Unfortunately, it’s not as easy as buying a big screen TV, taking it home and plugging it in.  There’s a great deal of work yet to be done but we are confident the board will be up and running by Oct. 8."

One aspect of the board that will be in operation on Saturday is the new sound system.  There will be 125,000 watts of pure digital sound filling BB&T Field for the NC State game.

Frank L. Blum, the general contractor, was given an Oct. 8 deadline when construction began back in late May and expects to meet that deadline.

"We knew when we started construction that if we were to have it ready for the first home game, we would have needed to start construction in February," said Adams.

Temporary video boards will be put in place in both end zones and the new ribbon board, on the south side of Bridger Field House, will also be active for Saturday’s 3:30 p.m. home opener with NC State.

"The structure that holds the video board is forever," said Adams.  "When technology changes and the next generation of video board becomes available, we will have the structure in place to change out the old board for the most modern board."

The temporary video board that will be placed in the South End Zone will be right in front of the new structure.  The temporary board will be the exact same size as the previous video board at BB&T Field.