3 Thumbs Up, 3 Thumbs Down (Syracuse Recap)

Share All sharing options for: 3 Thumbs Up, 3 Thumbs Down (Syracuse Recap) 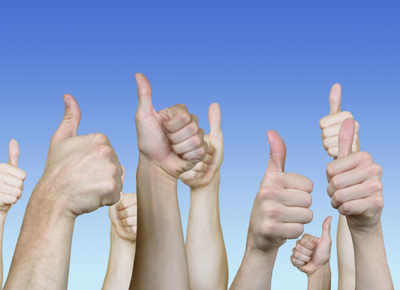 I lied on Monday when I said that I wouldn't write anything else about the Syracuse game. Other than the immediate recapitulation that Martin threw up right after the game, we didn't really discuss the game at all. It made me really sick to my stomach to think about. Now I can fathom writing a bit about it, so here goes my 3 Thumbs Up and 3 Thumbs Down.

This will likely become a weekly article.

All-in-all, I was very, very pleased with what I saw on Thursday night from the team. I think they have turned a corner in the off-season and will surprise some people this year. That said, the Deacs can go two directions from the loss... "play like your hair is on fire", or mail it in because of that loss. It will be pretty evident in the first few minutes against N.C State which it will be.
It is the home opener so we should be jacked up and ready to go. Get out there and support this team at 3:30. I don't think you will regret it, and you might even have a good time!