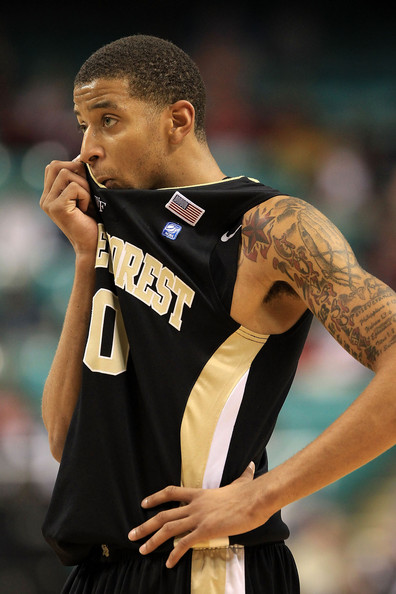 WINSTON-SALEM, N.C. –  J.T. Terrell, a guard on the Wake Forest men’s basketball team, is withdrawing from the University and leaving the basketball team effective immediately.

"At approximately 3:00 a.m. (Saturday) morning, J.T. Terrell was arrested by the Winston-Salem Police Department and charged with driving while impaired," said Terrell’s attorney, Mike Grace, through a statement.

Click through the jump for the entire JT Terrell story.

"Due to circumstances surrounding his arrest, along with other recent indicators, it is obvious to J.T. and his family that J.T. suffers from a serious medical condition which requires immediate attention," said Grace.  "Consequently, J.T. and his family have authorized me to inform the University, Athletic Director Ron Wellman and Head Coach Jeff Bzdelik of his intent, effective immediately, to resign from the men’s basketball team and to withdraw from Wake Forest University."

"We wish JT well as he seeks to turn his life around," said Bzdelik.  "He is at an important crossroads in his life and needs to devote his full attention to recovering."

"Our primary concern is with J.T. and his well-being," said Wellman.  "We expect that he will embark on a course of action that will help him make amends and put his life on the proper path.  We wish him the best."

Terrell, through his attorney, expressed his appreciation to the Wake Forest University family and Coach Bzdelik and his staff for the kindness, support and opportunities extended to him over the last year.

"I would like to offer my sincere apology to Wake Forest University and its fans, the coaching staff and, most importantly, my teammates for my terrible lack of judgment in this matter," said Terrell in a statement released by his attorney.  "I ask for your prayers and best wishes as I undertake the task of rebuilding my life over the next few months.  With your continued support, I hope to one day both complete my college education and play basketball at some level."