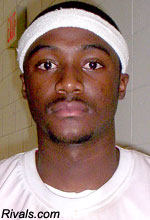 The charges stem from an on-campus incident in June, Cox said. As of 3 p.m. the warrant had not been served.

There is no indication that Ty Walker is facing any charges at this time.

"I don't exactly when it was but it was a few days ago," Bzdelik said of Tabb's release

We at BSD wish Melvin Tabb the best in his future endeavors and hope that he can learn from this and catch on somewhere else to put his career (and life back together).