Share All sharing options for: 8/8 Football Practice News and Notes. 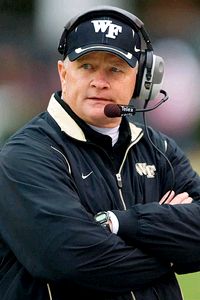 I got a chance to make it out to the 2nd practice at the Doc Martin Practice Facility last night, and it was quite pleasant weather for a summer practice. There had been some cloud cover, and obviously since it is at night,. the Deacs avoided the heat of the day.

The team practiced in just helmets, but I believe tonight they are going into shells for the first time. I will also head out there tonight with WakeJake and BJohnston to check out the team and get some other eyes out there. Stay tuned into our Twitter accounts for live updates at practice (and mine to check in on live updates from last night).

Click through for a brief run through of practice and some of my (less than good) observations.

Overall the practice had a great feel of optimism and positivity to it. Everything coming out of the football program right now from players, coaches and anybody that has been there is pretty encouraging. I'm not saying we are going to win 8 games and have a repeat of 2006, but I think we could surprise a team or two with our loaded schedule this year. Should be very entertaining to watch for sure. More updates tonight at/after practice!

Below are some quotes from Wilber to Dan Collins and JournalNow.com about the switch to the 3-4:

"I was kind of upset, because I was comfortable with the other 4-3 defense," Wilber said. "I was a defensive end, and now all of a sudden I'm a stand-up outside linebacker, and I really didn't know how to play that.

Wilber has since changed his tune after getting used to the 3-4:

"It's very exciting," Wilber said of his new position. "I get to use my feet more. I get to use my speed. I get to mess around with some of the wide receivers. I get to hit them and knock them off their routes.

"I love rushing the passer. Coach, he's put in a lot of plays for the outside linebacker to rush the passer. I've got to work a lot on my coverage skills. I'm trying to have (junior cornerback) Kenny Okoro help me with that.