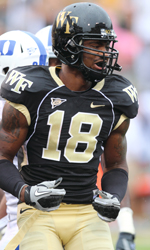 Wake Forest is a little over two weeks away from opening up their football season against Syracuse and provided a little sneak peek of the team today in the team's first preseason scrimmage. The Deacons practiced and scrimmaged for a little over two hours at BB&T Field in an event that was open to the public. The scrimmage provided an opportunity for nearly all healthy players on both sides of the ball to see the field, and fans the first chance to see how the Deacons look in a non-practice setting.

I'm certain there are things I've missed or misremember from this morning, but if anyone has questions or concerns let me know and I'll be sure to answer them.