Share All sharing options for: 8/10 and 8/11 Practice News and Notes 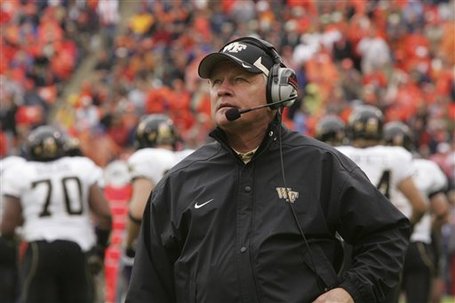 Didn't get a chance to get these practice updates up last night (or the night before after practice), so I'll package them together here. On 8/10, the team practiced in shells, and yesterday the team was in full pads for the first time. As with any other writer covering a team, I loved the intensity of the guys out there and it has got me ready for the season to start.

Today is the first day of two-a-days, but I will not make it out there for live tweeting. I will talk to some people and figure out how everything went and if there is anything notable to report. First scrimmage is on Monday at BB&T Field, and we will certainly have somebody out there covering that.

Click through the jump for notes from practices on Wednesday and Thursday.

All in all the confidence in the team is up, and the whole team seems to be gelling much better than last year. Of course when a team is practicing everything is zero sum, but the defense seems to be doing quite well in the early going, even in the pass skeleton, which says a lot about how our secondary has improved. There have been a couple of minor skirmishes/fights, but nothing too serious. The older offensive and defensive guys have been quick to protect their own younger guys, and that has resulted in a few heated confrontations.
I am really jacked up for the season to start after these practices, and can't wait to see the scrimmages with the guys flying around hitting each other. Cautiously optimistic is the view that I am taking right now, and I am very pleased with what I have seen so far.