Can Josh Harris be as good as Chris Barclay?

Share All sharing options for: Can Josh Harris be as good as Chris Barclay? 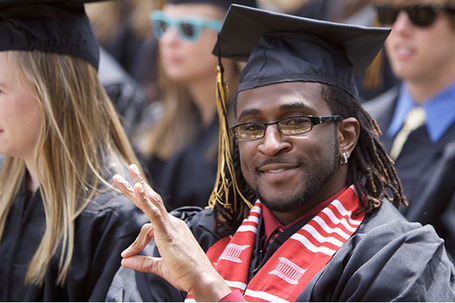 Recently at BSD we have had a lot of articles that are heavy on facts and fairly light on opinions, especially about the upcoming football season. This article is the first in the a few over the next month that will basically be thoughts that cross my head during any day, that are then transposed to paper. Facts may be few and far between, but it gives me a good place to talk about things that I think people may or may not want to read about.

Aaaaaaand if you don't want to read my opinions I am quite alright with that too. There will be plenty of articles with more facts for you coming up soon as well. Enjoy!

Click through for a comparison of Josh Harris, and one of the best running backs to ever play at Wake Forest.

First of all, let me preempt any criticisms that I may receive by stating the following in big bold letters: I AM NOT IN ANY WAY, SHAPE, OR FORM STATING THAT JOSH HARRIS IS CURRENTLY AS GOOD AS CHRIS BARCLAY WAS PLAYING FOR WAKE FOREST FROM 2002-2005. I am merely going to take a look at their running styles, players around them, and similar freshman years to give a sense of how good Harris can be over the next 3 years at Wake Forest (barring injury or early exit to the NFL).

Now that we have set the parameters for this article, we need some statistics to beef just how good Chris Barclay was. See below:

Here are a few of his accolades as well:

Now seemingly, Chris Barclay is heads above Josh Harris by looking at these stats and records, but if you look at their freshman seasons there are some interesting similarities:
Chris Barclay (2002) vs. Josh Harris (2010)
Game-by-Game Comparisions
Chris Barclay
Josh Harris
Things to Consider
With these things in mind, let's take a look at what Chris Barclay accomplished in his sophomore season to see if Josh Harris can keep up.
Barclay's sophomore year was fantastic overall, and he really picked it up at the end of the year.
So....to answer the overarching question---if Harris is going to get these types of numbers, the offensive line is going to have to be very much improved, and much more consistent. Jim Grobe has spoken often about pounding the ball this year, and hopefully that means Josh Harris will get a ton of carries if he can stay healthy (and out of the doghouse).
Josh Harris can be as good as Chris Barclay, but it is going to take a lot of luck and hard work. Barclay was in a perfect system for a running back, with superb offensive linemen, where the Coach Grobe made running a way of life, and Barclay stayed healthy for all four years. Harris has already shown a proclivity to getting injured in the past season, but hopefully with better conditioning he can put that behind him. Chris Barclay is one of the best running backs to ever play in the ACC, and Josh Harris has a long way to go to get in his league. His freshman year is pretty comparable, but now he has to step it up for 3 more years. It should provide Josh with a career goal at Wake Forest, which will be good for him as well.
I think a reasonable expectation for Harris this year would be around 1000 yards on 220 carries(ish). I doubt he will be able to keep up his 5.7 YPC, and 220 for 1000 is actually pretty conservative (bumping him down to 4.5 YPC). I could easily see him keeping his YPC around 5. Wake will have to figure out a way to get him the ball even when we are trailing though. Whether or not he will wind up as good as Barclay or not, Josh Harris is an electrifying player who keeps the defense on their heels the entire game just waiting for the big play. I know I will enjoy watching him this year, and however many more years he plays for Wake Forest.