Interview with Syracuse Blog (Troy Nunes is an Absolute Magician)

Share All sharing options for: Interview with Syracuse Blog (Troy Nunes is an Absolute Magician) 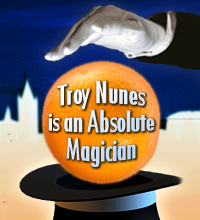 It gives us great pleasure at BSD when we get the chance to speak to any other SBNation blog, but we have really outdone ourselves this time and pulled an interview with one of the best ones out there when we spoke with Sean Keeley of Troy Nunes is an Absolute Magician (TNIAAM). TNIAAM has been heralded near and far as the internet's best Syracuse blog. Sean has also authored a book (How To Grow an Orange: The Right Way to Brainwash Your Child), and at his helm at TNIAAM garnered a spectacular 7.5 million page views.

We threw Sean some questions about the season opener between Wake Forest and Syracuse, and boy did he ever come through with some fantastic answers. He also sent some back to us that we will attempt to answer half as well as he did ours! This interview is a must read for any Wake or Syracuse fan, and especially if you are planning on making the trip up to Syracuse in a month or so! Enjoy!

Click through the jump to learn all about Syracuse and the season opening game against the Orange.

We are getting started this week with our breakdowns of opposing teams on the schedule. Since the WFU-Cuse game kicks off on Thursday night of the first week, I figured I would go ahead and and reach out to you and throw a few questions your way.

1. Coming off of a bowl game in 2010 (and a 5th place projection in the TNIAAM Preseason rankings), what do you expect from Syracuse this year in terms of wins and a bowl game?


I'd like to point out that my 5th place projection is a little deceiving. Remember, we're talking about the Big East where the league champion had 8 wins last year and about 27 different teams were co-champion of the league.

I think the Orange are still on the right path and on their way to a second-straight bowl game. However, things are a little flip-flopped this year. Instead of having a dominant defense and iffy offense, the roles might be somewhat reversed. Our receiving corps and offensive line are both as good as we've had in years. Antwon Bailey is way under the radar for a guy who's proven he can put the team on his back already. And Ryan Nassib isn't going to have too many 5 TD games (except maybe the Rhode Island game) but he's adequate and will be a little older, a little wiser and should have some more protection in the pocket to make plays.

Meanwhile, the defense has a lot of question marks. Our linebackers are going to be star-in-the-making Marquis Spruill and then a lot of unknowns. The D-line has some great anchors in Chandler Jones and Mikhail Marinovich but the nose tackle spot is a big question mark. We have a lot of talent but not a lot of size. The Thomas Boys (Shamarko and Philip) at the safety spots are very solid but the corners are a cause for concern.

Looking at the schedule, it's a little tougher than last year but I still see a lot of wins on there. If the Orange take a step back from 8 wins to 7 wins, a lot of folks will be fine with that. I'd like to think we can at least match the 8-win mark, but it's going to be interesting to watch.

2. Who are the impact players that Wake Forest absolutely has to know about to have a chance to win the season opener?


Defensively, you're going to want to keep your eye on DE Chandler Jones and LB Marquis Spruill. Both are ready for breakout seasons and should be involved on a lot of plays all day long. On offense, Antwon Bailey is going to shoulder most of the load at RB. He's not as big as Delone Carter but he's a good combo of power and speed. Great pass-catcher out of the backfield and he's very familiar with the Wildcat. And our wideouts (Marcus Sales, Van Chew, Alec Lemon) all bring a lot to the table...when they hold on to the ball.

3. What are your honest expectations for the Wake game? Do you think Wake Forest has any chance to win the game or are most fans marking Wake down as an easy win like the rest of the country is doing?


I never like to make assumptions about the first game of the season. As a Syracuse fan, it's a tic I've developed from years of watching Paul Pasqualoni team's disappoint out of the gate and Greg Robinson teams barely show up. That said, I fully expect the Dome to be absolutely rockin' and that's a big bonus for us. If the Orange can take what they did in the Pinstripe Bowl and maintain that brand of football, especially on offense, they'll be tough to beat. If they revert back to the kind of output we saw late in the year against UConn (L, 6-23) and Boston College (L, 7-16), we're in trouble.

4. Give us a fun fact about the Syracuse football team that opposing fans would find interesting!


We hate Boston College, so we've got something in common there. Otherwise, I know it sounds weird to a lot of young college football fans, but, we used to be really good! I swear! We won the National Title in 1959, came within a Pat Dye wuss-out of going undefeated and untied in 1987 and went to the Fiesta Bowl and Orange Bowl in the late 90's. We had a rough decade there but we're on the upswing. Promise!

5. Is there anything else that you want to convey to Wake Forest fans that may or may not read this blog?


For any of you making your way up to Syracuse for the game, let me give you a couple recommendations...

Dinosaur BBQ - I understand you guys are coming from North Carolina and, therefore, might think there can't possibly be good BBQ in Syracuse, NY. I ASSURE you, this place will measure up. That or your money back.*

Faegan's Pub - The Marshall Street area is the place right next to campus where all the bars and local restaurants are. Don't bother with any of the other bars, stick with Faegan's. Decent grub, tons of beers and a good place to pre-game. You probably don't want to go there post-game, though.

Mother's Cupboard Fish Fry - Featured on Man vs. Food, try your hand (or mouth) at the Frittata Challenge.

Bring a Jacket - Not the name of a place, just a realistic suggestion.

* Not an actual guarantee.