Share All sharing options for: Know Thy Opponent: The Syracuse Orange (Offense) 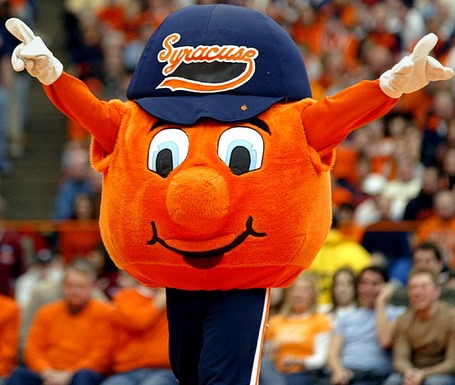 Welcome to the first installment of the "Know Thy Opponent" series. Over the next month, we here at BSD will  be previewing each and every opponent that we face this year on the gridiron. First up we will take at the Syracuse Orange Offense. Tomorrow we will take a look at their defense.

Click through the jump for all sorts of rankings and statistics about Syracuse's ofense.

Quick  Recap:
Rushing Statistics
Recap:
Passing Statistics
Recap:
Recap:
Overall Recap
It would appear that Syracuse has a lot of returning players on their offense, but that is not necessarily a good thing considering how mediocre they were last year. I would expect Ryan Nassib to have a pretty good year for them, and will definitely need to start off the year strongly as they figure out their rushing game. The receiving corps has to get better, and they should if they can live up to their names (see Van Chew and Marcus Sales). Doug Marrone stresses defense and a strong running game, so Antwon Bailey is going to have to step up and fill the hole that Delone Carter leaves.
I expect Syracuse to improve slightly from their offensive output last year, but that isn't saying much. There are a ton of questions about the Orange on offense right now, and few will be answered before the regular season gets underway. Unfortunately for Wake Forest, it is nearly impossible to tell how we will matchup because of how bad we were last year on defense. Time will tell.