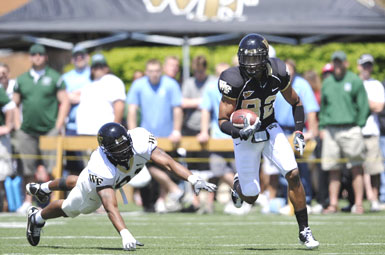 Over the past week we've taken a look at the Quarterbacks and the Running Backs, and today we'll continue on to look at the Wide Receiver corps.

The Wake Forest receivers will begin the year relatively unknown and unheralded. While leading receiver from last year, Chris Givens, returns for his junior season, the Deacons lost Marshall Williams to graduation and Devon Brown to (essentially) a transfer to West Virginia. This is one of the spots on the Wake roster where there will certainly be questions, but there is certainly a large amount of potential at the position moving forward.

Click through to see statistics from each RB that played last year, as well as a breakdown of each players strengths and weaknesses. Stats thanks to http://web1.ncaa.org/football/exec/rankingSummary?year=2010&org=749

The Deacons passing attack was somewhat hindered last year by the combination of a freshman quarterback, injuries at the quarterback position, questionable protection by the offensive line, and a series of drops by receivers at critical times. The 2010 receiving corps caught a total of 121 passes last year, headlined by Givens, Brown, and Williams combining for 98 of those catches. This fall's edition of the team returns 47% of last year's catches, with Williams and Brown both moving on from Wake.
A large question when looking at receptions from last year when compared with this year's roster is the number of receivers who will see playing time who either had very limited experience on the field, or no catches at all. Rucker, Jackson, Terry, and James will all see the field in some capacity next season and had a total of zero catches (obviously redshirts came into play here). It will be very interesting to see who steps up to take control of the backup receiver positions, getting playing time when the offense goes into four and five receiver sets.
Givens is going to be the focal point of the receivers as he has the experience on the field, has explosive quickness, and will act as a leader (alongside Dembry) for the younger guys at the position. Teams are going to be putting their best corners on Givens in many situations and it's absolutely necessary that he continue to evolve as a player coming into his junior year.

Givens will need to be an every game presence and a constant threat on underneath and shorter, quick hitting routes. His presence in the lineup allows for bigger guys like Dembry, Davis, and Terry/James to establish themselves as the successor to Marshall Williams as a more possession-like receiver, as a larger target for Price to hit.
Although Dembry and Davis have not had a multitude of playing time, they have both shown in scrimmages and spring practice that they can both run succinct routes and get open. The biggest question for Davis will be the health and strength of his surgically repaired knee. While the injury occurred two years ago, Davis oftentimes looked tentative on the field last year (although he saw the field in 10 games) and was certainly not at the level he was prior to the injury. I fully expect one of these guys to step up and have a solid campaign this year, hopefully hauling in 20-30 catches.
Redshirt freshmen Brandon Terry and Matt James are certainly the receivers of the future as they have size, speed, and as far as one can tell, the dedication to put in the hard work necessary to see the field. It will be a question if one of them can step up and fill a third or fourth receiver role this year, but this will be a critical year for them to distinguish themselves from the freshmen who will most likely redshirt (Ragland, Willis, Howard).
Beyond the basic receiver position though, the Deacons are certainly well served in the slot position with the explosive sophomore Michael Campanaro holding down the starting job. Campanaro had a great freshman year recording 10 catches for 107 yards in addition to 29 rushes for 123 yards, all while holding down one of the starting kick returner positions. Campanaro is built in the Givens/Brown mold of receiver, as he lacks the height of many other receivers on the team, but his size and agility allows him to elude bigger defenders.
Not a great video, but here is Campanaro at a skills competition before his freshman year at Wake:

The receiving positions really are one of the biggest questions for the upcoming football season. For Wake to have a successful passing game this season, they are going to need to work more carefully on timing with quarterback Tanner Price and hopefully avoid injuries which have plagued a large number of Wake receivers over the past couple of years.
The position is also very dependent upon the rest of the offense getting their job done. The offensive line's struggles over the past few years have been well documented, and have really wreaked havoc on the passing game in general. Wake has a solid mixture of bigger possession guys and smaller, quicker playmakers at wideout to really allow Offensive Coordinator Steed Lobotzke to open up the playbook a little bit with regards to airing the ball out, perhaps even returning to some more orbit sweeps or wide receiver screens which were so successful in the 2005-2008 years.
Hopefully the bigger guys will provide good blocking during the running game as well. There have been way to many occurrences over the past couple years where cornerbacks have gone through to the back field nearly untouched because the scheme was either not solidly worked out by the offense, or more frequently, the wideout was simply not in the right position to make the block.
This is one of the more exciting positions on the field, particularly when considering the younger players who we have the opportunity to watch grow over the next few years at Wake Forest.