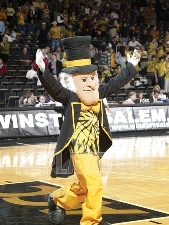 Today we have a vast assortment of interesting Wake Forest related links. Enjoy!

Basketball Brothers Chase Their Hoop Dreams
Noah and Chase Fischer are rarely apart. They're more like best friends or even twins than older and younger brother. But the game they love will soon split them up. Noach spent the last two years as a walk-on at Marshall, but he wants to play, so next season he'll play at the University of Charleston. Opportunity is not a concern for the highly recruited Chase. The parade All-American led West Virginia in scoring the last two years and is headed to Wake Forest.

Despite recent records, Grobe a fixture at Wake
Jim Grobe has done something over the past decade not long ago deemed impossible at Wake Forest. He created an environment where Demon Deacons fans get seriously upset when the football team loses. But a recent trend that culminated with a 3-9 mark last season has sparked a debate in some circles: Is Jim Grobe untouchable?

2011-12 All ACC Predictions: 1st Team | Run the Floor
McKie will likely join Zeller as one of the top dual scoring/rebounding players in the ACC. Unfortunately he converts threes at just enough of a rate to make him keep trying – if he focused on his interior and mid-range game he’d be a true monster.

2011-12 ACC Basketball: #9, Wake Forest | Run the Floor
: The only reason I’m picking this team over Maryland is that Wake only has to play UNC, FSU, Miami and Virginia once each, and they get Georgia Tech and Boston College twice. In short – it’s an easy schedule.

Atlantic Division Recruiting Snapshot Jim Young
The fact the Deacs once again have the fewest number of commitments is not news. Wake’s commitment to redshirting, and its ability to retain many of those recruits for five years, means the Deacs are rarely looking for big classes. The fact that none of the current commitments are highly rated is also in keeping with Wake’s m.o. of finding hidden gems and developing them into ACC-worthy players by years four and five. That approach certainly worked well for the Deacs when Riley Skinner was the hidden gem poster boy. Lately though …

BC Interruption - For Boston College Eagles Fans
Brian: It's hard to believe that just 5 seasons ago, the Wake Forest Demon Deacons were ACC football champions and playing in the Orange Bowl after compiling a 11-2 regular season record. Not bad for a school with the smallest enrollment in the BCS. However, the dream 2006 season looks like a bit of a historical high water mark after examining Wake's resume recently. In the last four seasons in Winston-Salem, Jim Grobe and his Wake team have won fewer total games and fewer conference games in each successive season.

ACC’s Top-100: No. 73 Ty Walker, Wake Forest " Big Duke Balls | A Duke Blue Devils blog
Ty Walker came to Wake Forest in 2008 as a five-star recruit. In fact he was rated the 4th best center in high school. That’s a ton of props, but after three seasons, Walker has done very little for the Demon Deacons. Hell, the five-star recruit has yet to even average five points per game in any season.