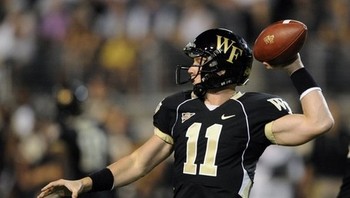 It is only sensible when breaking down each position to start with the most important: quarterback.

Wake Forest has to improve their passing game from last year if they want to be much better on offense this year. This will require a lot of help up front from the O-Line, but also will depend on how much Tanner Price has improved in the off-season as well.

Click through to see statistics from each QB that played last year, as well as a breakdown of each players strengths and weaknesses. Stats thanks to http://web1.ncaa.org/football/exec/rankingSummary?year=2010&org=749

Last year, Wake Forest came into their season opener against Presbyterian with a lot of question marks at the quarterback position. Ted Stachitas began the year as the starting QB, but Price, Jones, and Cross all got snaps during the game. Stachitas showed his prowess on the ground and in the air. In the next game against Duke, he ran for 81 yards on 9 carries, but a back injury forced him out for several games. Tanner Price stepped in and impressed right away with a 12-19, 190 yard, 3 touchdown effort. That cemented the job for Price and he hasn't looked back yet.

Wake Forest quarterback Ted Stachitas has won the starting job and his backup will be true freshman Tanner Price, according to a school spokesman.

The Demon Deacons have one more scrimmage on Thursday, but it's unlikely any performances will change coach Jim Grobe's mind. Stachitas won the job this summer from Skylar Jones, who finished spring practices at the top of the depth chart while Stachitas was out with a hamstring injury.

This year Price comes in to the season as the undisputed #1 QB. There have been several speculations that our most recent signing, Kevin Sousa, could take over that role when he gets in here, but I am pretty sure he will take a red-shirt and take the year to get up to speed on the college game. Sousa is no doubt a very talented player, and could very well be the dual-threat QB that we are looking for, but certainly not this year. How well Tanner Price does this year will answer a lot of questions as to how open the race will be a year from now.

Let's take a look at the statistics for Tanner Price last year:

Nothing really jumps out in the statistics. Due to some questionable offensive line blocking, he often found himself throwing on the run. His completion percentage is 57% (137-241), which is below average for an ACC player (87th in the country). The passing game definitely struggled overall, and as a team we ranked 114th in passing yards per game, and 11th overall in the ACC.

Coming out of high school Price was ranked as the 27th best QB prospect by ESPN, and rated as a 78. Here is their write-up on Price:

There is a lot to like about this well-armed lefty. Price is calm, poised and very sharp in terms of overall fundamentals. He has adequate-to-good size with growth potential both height-wise and frame development. He possesses a live arm, very consistent footwork and throwing mechanics and he is extremely accurate. He is primarily a shotgun passer in the spread. Drops, feet and set-up are consistently balanced and smooth. Always has his feet underneath him, steps into throws, plants and transfers weight to get maximum power and velocity. Displays the ability to look off defenders, controls safeties with his front shoulder tilt and eyes and has proven he is capable of working through progressions and getting to his next option quickly. Has very good command of this offense, plays with confidence, can move around within the pocket and keep the play alive. He isn't a dual-threat guy, but possesses just enough athleticism and feet to find the open receiver and avoid the rush. We really like his ability to hit the strike zone with zip and arm quickness. Places the ball in catchable spots for his target. For a lefty, he shows a relatively consistent over-the-top delivery and at times will show the ability to change his release point to avoid batted balls at the line of scrimmage. Release is quick and compact which is not always the case with left-handers. He has shown the ability to make a variety of difficult throws and make them with confidence and authority. Price does not possess ideal height, but it is sufficient. He has not taken many snaps from under center, but we would feel his footwork is just as solid from center as it is out of the shotgun. Overall, Price is a guy that should see his recruitment heat up significantly. He is a very good prospect that has upside for the future.

I would say that assessment of Price is pretty accurate. He is certainly not a threat on the ground, but he can evade the rush and prove somewhat accurate at times. He has to learn how to square his body up and not force throws where they cannot be made. He has a cannon of an arm, and that is pretty hard to dispute after watching him last year. He seems to have a lot of intangibles that will push him to succeed though. He is a very hard worker, and I saw him several times on the practice field in the late afternoon practicing his rollouts, or running some wind sprints after practice had ended.

I believe that Tanner Price will make a big jump from his freshman year to this year. With the addition of Lonnie Galloway, I am almost positive that the receivers will run crisper, quicker routes, and will also decrease the amount of drops a lot (which was a big problem last year). That will help Price have confidence in his receiving corps, and also be more willing to take a few more risks, which done at the right time can be very beneficial.

I'm not sure that Price is the QB of the future, and a lot of that depends on how good Kevin Sousa proves to be in the coaching staff's eyes during his RS year. I do think that if we can run the ball successfully with Josh Harris (who should be around 1,000 yards this year), Price can be a very good game manager. Since we were behind so much last year, it is hard to put a lot of stock in some of Price's numbers. He was asked to try to bring us back in several games and probably made some throws that he would not normally have made. A successful year for Tanner would be: a positive TD:INT ratio, throwing for around 1300-1500 yards, and a completion percentage of around 65%. All of these things are attainable, and I believe he can get there.

As I said earlier, Stachitas appeared to be the QB for last year in the first game and half. At Nease High School, Ted Stachitas stepped in to the starting role left void by one Tim Tebow, and excelled after him. Stachitas seemingly models his game after Tebow. He is a fantastic runner, which thanks to his build allows him to bowl over potential tacklers. He is the definition of a dual-threat QB, and has a fairly good arm to go along with his running ability. If he can stay healthy this year, he could be a good QB to come in and run a few plays to throw off the defense if they have not scouted him.

ESPN was fond of Stachitas, and ranked him as the 50th best QB, and a 76 overall:

It is hard not to like everything about this kid-- he has intangibles, he's tough, he is the very definition of the spread offense as a dual-threat guy and he has a craftiness about him that is intriguing. He is more advanced at this stage as a runner, but does have the skills as a passer to really develop. He shows exceptional speed for the position-- good enough to play wide receiver and he has a real knack for the read-option out of the shotgun. Knows when to pitch, fake, keep and has very impressive open field running skills once at the second level. Has the speed to win footraces. He has a quick release and live arm in the short-to-intermediate game. Goes through his reads and gets rid of the ball on time. Is at his best when he can plant and throw without hesitation when the progressions are clear cut. Is dangerous as a passer on the perimeter. He can throw across his body and off balance accurately and always seems to find a way to get out of trouble and create when things break down. As a passer his best attribute is consistent accuracy. However, Stachitas is undersized and may be a late bloomer although we are not sure how much taller he can get. He needs to be in a scheme where the launch point is moved from time to time because he will have trouble finding throwing lanes at the next level. At times shows a low delivery point which negates his already below average height. Needs to put on bulk to maintain durability. The bottom line is Stachitas is a scrappy competitor and has the savvy to find ways to move the chains and lead a football team. If he were taller, he would be receiving much more attention.

As with Price, the ESPN article pretty much nailed it with Stachitas. He is definitely a more skilled runner than Price, but Price has the better arm by far. It was easy to see why Stachitas won the job from Price last summer, but Price definitely has more upside as a sophomore.

The bottom line is that hopefully these guys are not asked to do too much. If we go back to what succeeded for us in 2006-2007 with the orbit, misdirection offense, we just need to let Price get the ball in the hands of our playmakers, of which we have plenty. Any time that Price throws over 25 times a game, we are going to be in trouble. In the wins against Duke and Vanderbilt, Price threw the ball 19 and 14 times respectively. If he can keep that average right around 16-18 a game, I believe that we will be in business. That means we are running the ball effectively with a good mix of slants/screens/curls involved, with the occasional bomb or two deep.

Price will either be a game-manager, or a gun-slinger. I hope it is the former, because that means our offense is efficient, effective, and getting the ball in the hands of our best players. If he can stay healthy, I have high hopes for him this year.