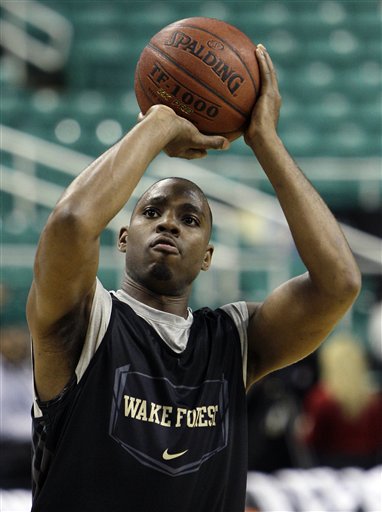 According to the Winston-Salem Journal, the two former Wake Forest basketball players to be implicated on the Today Show on Thursday are Gary Clark and Jeff Teague. The alleged incident occurred the morning of March 21st (differing from earlier reports that it occurred the night of March 19th) during the Demon Deacons' trip to Miami for the NCAA tournament. Clark, a team captain in 2011, graduated this year from Wake Forest and Jeff Teague currently plays in the NBA for the Atlanta Hawks, after being drafted in the first round in the 2009 NBA Draft.

A former Wake Forest University student who will appear Thursday on NBC’s The Today Show filed a complaint in 2009 alleging that former WFU basketball player Gary Clark sexually assaulted her in a hotel bathroom while teammate Jeff Teague stood outside the door [...]

The report goes on to say:

After the investigation was completed, the police consulted with prosecutor Laura Adams in June 2009.Adams eventually decided against filing criminal charges because there was no physical evidence and corroborating witnesses, the student didn’t report the allegations immediately to police, and Clark denied the allegations, according to the police report.

"In light of the above facts and circumstances, the State would not be able to satisfy its burden of proof beyond a reasonable doubt," the police report said.

Wake Forest did not comment on the case because of existing FERPA laws:

"Regarding this matter, I must emphasize that federal law prevents the university from discussing specifics of this or any other student case," Hatch said. "I can assure you the University takes these issues seriously, has a well-established Code of Conduct and has procedures for hearing alleged violations of that Code of Conduct. In addition, Wake Forest offers significant resources to support our students in times of need."

The alleged victim of the assault is set to go on the Today Show on Thursday May 19th on a segment discussing sexual assault in colleges.