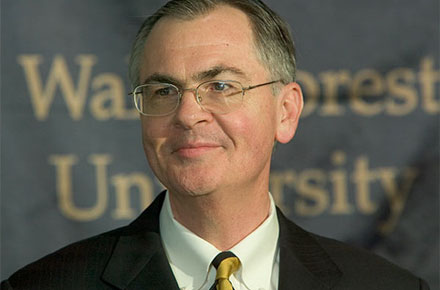 Wake Forest President Nathan Hatch has sent out an email to the Wake Forest community responding to the news that a former Wake Forest student will make an appearance on the Today Show Thursday morning. The student is expected to appear on a segment discussing sexual assault on college campuses, stemming from her own incident with two former members of the Wake Forest basketball team. The event allegedly occurred on March 19, 2009, the night before Wake Forest's 84-69 loss to Cleveland State in the first round of the NCAA tournament.

Click through to view President Hatch's email after the jump

It is my understanding that on Thursday, NBC's Today Show plans to air a
story about the problem of sexual assault on college and university
campuses. We have been advised by a producer of the Today Show that the
story will include an interview with a former Wake Forest student involving
an incident that occurred several years ago. I am aware that some members of
the local news media have received an email purporting to provide
information about that incident. I have also recently learned that this same
email may have been circulated more broadly, and some members of our Wake
Forest community may have received it in their personal email accounts.

Regarding this matter, I must emphasize that Federal law (FERPA) prevents
the University from discussing specifics of this or any other student case.
I can assure you the University takes these issues seriously, has a
well-established Code of Conduct and has procedures for hearing alleged
violations of that Code of Conduct. In addition, Wake Forest offers
significant resources to support our students in times of need.

Fostering a positive and respectful living and learning environment is of
paramount importance at Wake Forest University. As part of our Pro
Humanitate mission we strive to treat all of our students with integrity and
compassion.

Rest assured that the University is taking appropriate action to respond to
this matter.