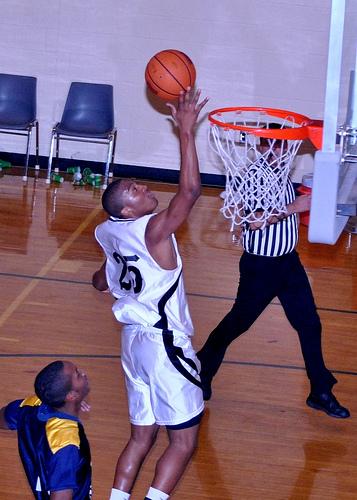 At 6’3 195lbs, Major Canady has the size to be an excellent point guard at the high school and college levels.

Last season at Kiski School, Canady helped lead the team to an impressive 26-12 mark, but it was not always an easy road.

"We had two 7 footers transfer on us during the season as well as a 6’9 player", said Canady.  "That caught us all by surprise but the rest of us just had to step up our game".

Canady started the season as a real facilitator of the offense but his role expanded as the season progressed.

More about the impressive PG after the jump...

"I began the season as a real distributor but during the season I became more of a leader and scorer for our team.  I was named captain this season as a sphomore which was a real honor.  I had four double-doubles this season and also had 18 points against Westchester (N.C.) at the Glaxo tournament.  All in all it was a good season for me".

Canady is not complacent with where he is in his development and is currently working to refine his point guard skills.

"I think my strengths right now are getting to the basket and making things happen.  I feel I can get to the rim at will.  I am also a good defender that plays hard all of the time and I am also a very good team leader.  I am working on being more consistent with my 3 point shot".

A few months back, Canady was able to visit Wake Forest and came away quite impressed with the Demon Deacon program.

"I visited Wake with my dad and sister.  I loved it there.  You not only get to play a high level of basketball at Wake, you also get a great education.  The coaches at Wake have been great to me and I was also able to meet some of the current players.  The staff really took a lot of time with me when I visited and they are very genuine people".

In addition to interest from Wake, Canady is also hearing from Clemson, Tulane, Notre Dame, N.C. State, VCU, Kent State, and has an offer from Duquense.

Canady is playing this AAU season with KIng James 16u.