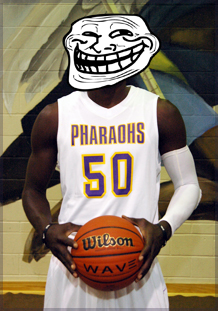 According to a few sources, Wake Forest is out of the running for QEA's Lekan Ajayi. His recruitment has been one of the most bizarre that I have ever followed, with him changing his top 3 three different times in the last two weeks. The top 3 each time listed 3 different schools. Wake Forest, Tennessee, Oklahoma State, Missouri, Loyola Marymount, Auburn, and a few others have all been mentioned. There have been rumors of academic qualification problems, but I cannot confirm that for sure.

Since this ship has sailed, it leaves us with another scholarship for the 2011 class. Hopefully this scholarship will land in the hands of Eric Katenda before the week is over. Katenda took his recruiting trips to Iowa and Notre Dame in the past two weeks, but was seemingly not blown away by either trip.

He has all but eliminated Iowa and got it down to Wake Forest and Notre Dame. There is talk of a third "mystery school", and that appears to be Nebraska, but I am not too worried about them. Coach Bzdelik is in Kansas today and tomorrow to watch Katenda and hopefully secure a commitment to Wake Forest. These two days are the last in a while that a coach can watch players live and talk to them. Katenda has about a month left to sign with a college.

We hope to have up a couple of player interviews before the week is over with a couple of 2012/2013 recruits. Come back tomorrow through Friday to see what we have in store!