Share All sharing options for: Interview with 2012 commit Codi Miller-McIntyre 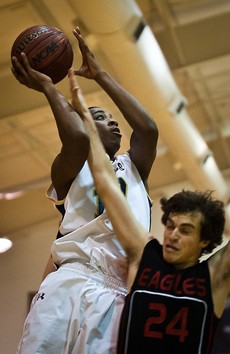 We finally caught up with Codi after the third game, and I am glad that we waited that long because he had his best game of the three in the last one. When everybody else was seemingly tired, Codi thrived, scoring 22 points and nearly leading his team to a huge comeback victory.

Codi is a very pleasant guy to interview. He is honest, has a fantastic demeanor, and is very respectful to everybody involved. He is also a bit quiet, but warms up nicely and jokes around frequently. It was a joy to interview him, as well as watch him play yesterday.

Congratulations on your commitment to Wake Forest. Can you talk about the recruiting process and why you chose the Deacs over anybody else?

The recruiting process went kind of slow because I was injured by sophomore year. I had to come back and not only get on people's radar, but prove that I could play like I did my freshman year. As far as the coaches, I really like Coach Battle a lot. I like him the most because out of all the coaches recruiting me he was the most active and engaging. He actually made me feel like family. We talked down at the CP3 tournament. As a matter of fact, the entire coaching staff felt like family. They are all extremely nice, honest, and I felt like I could talk to them about anything I wanted to during the process.

Wake was actually my first choice to attend. First of all, it's close to home. Sophomore year I thought I wanted to go somewhere far away, like Texas, but then I came around and started thinking "wow that's actually pretty far away" (laughed). I also wanted to go somewhere that I could get the best academics, and Wake is in the ACC, so that made it a pretty easy decision once they offered.

We know that you will be joining Aaron Rountree's AAU team this summer. Can you talk about the benefits of playing with a future college teammate on your AAU team, and how that might carry over into Wake Forest?

It's really a dream come true. I never thought that I would ever be playing with anybody that is as good as Aaron, or at the level that these guys play on. Once we got on the court together we clicked from day one. We just want to take the chemistry that we already have and take it to Wake. That can be a really good thing for everybody involved.

What do you think about the future of Wake Forest basketball with the commits that are coming in over the next couple of years?

I have a lot of faith in Coach Bzdelik, Coach Battle and the entire coaching staff. I have faith in the recruits that we are bringing in, and there is no doubt in my mind that the future is bright.

Talk a little bit about your game. What are your strengths? Weaknesses/things you need to work on this summer and next year before you get to Wake.

The thing I need to work on most before I get there is my full court man to man defense. I know a lot of colleges run a lot of man. I am alright once we get to the three-point line, but I can really improve my full court defense. The best part about my game is probably my confidence and toughness. I really don't care what the situation in the game is. If I have to take over the game then I will do it (as y'all saw in the last game). I don't like to do that, but if I have to then I will do it without a doubt.