Share All sharing options for: Interview with 2012 commit Aaron Rountree 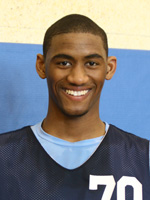 Blogger So Dear got the chance to catch up with 2012 commit Aaron Rountree at Dave Telep's Carolina Challenge yesterday. I will start off by saying that he is one of the most enthusiastic, genuinely happy players on and off the court that I have seen in a while. I believe we caught this on film, but when he guards around the perimeter and takes his defensive stance, he actually smiles almost all the time.

The interview we got was fairly brief due to time constraints on other things he had to do, but we got to ask him about the recruiting process, how Wake Forest looks in the future, and what position Wake Forest recruited him at.

This is the first of several articles we will publish over the next couple of days about Aaron, Codi, and other players that caught our eye. There will also be video up, but that takes a bit of time to splice and make, so be on the look out for that later tonight, or tomorrow at some point.

This is our first time seeing you play and we were impressed with your passing ability. Have you played a lot of point guard in the past? Any point forward?

I played point at high school, and I play a lot of point forward on my AAU team. I am on Montrezl (Harrell)'s AAU team, so we use a little two-man game to work the other team. When we are clicking we pretty much dominate the other teams.

Who are you most looking forward to playing against today?

That had to be at the top of the list because that was a talented team. We were beating them pretty badly, but I knew they were going to make a run. Rodney Purvis (2013, Louisville commit, top 25 right now in the class), and then the kid 52 and 51, the long, lanky kid I was guarding. I don't know his name, but I knew he could play pretty well.

Congratulations on your commitment to Wake Forest. Can you talk a little bit about the recruiting process and why you chose Wake Forest over any other schools?

I HATE the recruiting process, I just absolutely hate it. I love Coach Bzdelik as a person, but I can see where they love Skip better at Wake Forest when he was there. I see a lot of room for improvement, especially with (Anthony) Fields coming in next year. A lot of people don't know this, but he's a really solid point guard. They are going to be alright, and are certainly on the way back up to where Wake is supposed to be. All of us coming in just want to help and get us back up to the top.

What position did Wake recruit you at?

Small forward, but I can play a hybrid 1-2-3 if necessary.