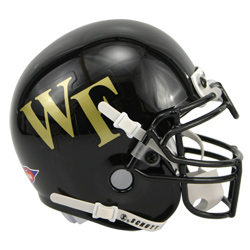 Thanks to Jared Shelton of Wake Forest Rivals (DeaconsIllustrated.com) for the following information about the Wake Forest 2012 football offers. Jared and his entire team do fantastic work and I would really encourage you to follow the website, and even drop the money to follow his entire team and keep up if you are into the whole recruiting deal. They do a fantastic job covering Wake Forest football and you could not ask for anything better.

Also, I really encourage you to click on the link and check out the website that I linked to above. This is really as close to spam as we will ever get here at Blogger So Dear. They have a great team of reporters, so keep the site traffic up over there. I appreciate the information, and I'm sure that he appreciates the site traffic and the comments! After all, we are all a family here at Wake Forest!

These are certainly not all of the offers that have gone out so far, but will give you a good idea of the kind of players that Wake is targeting for the 2012 class. I'll start first with offense and then cover defense.

Brock Stadnik: The bigger of the Stadnik twins, Brock is a monster offensive tackle prospect who has offers from nearly every program in the southeast. He's a big-time player and the staff loves his size at 6-foot-5. Still too early to tell where he'll end up, but it's always difficult to beat out that many schools for a prospect. Was just on campus this past weekend.

Clayton Stadnik: The smaller of the Stadnik twins, Clayton is a very talented center even though he doesn't have great size (6-foot-2). He also has some early offers, and whether or not those are from teams hoping to land Brock as a package deal, I can't say, but certainly a possibility. Wake likes him enough to offer though, and that's usually a sign that he's a pretty good prospect. Talked to him tonight, him and his brother were just on campus and got 45 minutes alone with Lobo to talk. Getting these two would be big-time.

Caleb Stacey: Another really big offensive tackle prospect, Stacey is from Cincinnati. He's a very smart young man and is getting a lot of interest from the good academic BCS programs. Stacey plays on the line with two other D-I offensive line prospects: Derrek and Dustin Ross, who are interested in Wake but don't have offers yet. In fact, Wake was recruiting the Ross twins and asked them to visit, and they brought Stacey along by happenstance. The Ross twins could receive offers at some point, but Stacey is Wake's top-rated guy at Oak Hills H.S. right now.

Ty Darlington: This kid is a really good-looking interior line prospect who has offers from all the big boys in the southeast. He's probably out of reach at this point, but Wake has gotten a big-time player from Apopka in the past: Kyle Wilber.

Kennedy Estelle: Estelle has a chance to be a program building type of left tackle. At 6-foot-7, the big Texan has drawn rave reviews from several programs and the offers have certainly followed. There probably isn't a great chance at landing Estelle.

Justin Meredith: This tight end prospect is big, fast, and can catch the ball, and because of those skills, he has offers from programs like LSU, Tennessee, South Carolina, and others. He has admitted that USCe and UNC are two programs that have caught his eye early on.

Ryan Janvion: This kid is flying somewhat under the radar right now, and Wake Forest appears to be his first offer. From what I've been told, this kid is very shifty and could play a variety of positions. He's from Dade Christian, the same school where Wake got lucky with Daniel Mack.

Bilal Marshall: A dual-threat quarterback, Marshall is the guy who most programs have headed to Dade Christian to see. He's got several offers early on, and if you haven't watched his film, you need to. He's an electrifying player who makes more plays with his legs than with his arm at this point, but he's certainly an electrifying prospect. Will need to work on his throwing motion and adding some weight, but certainly fits into the mold of the QB that Wake has targeted in the past few years.

Cyrus Jones: Another Gilman star, Jones is a huge talent who will have his pick of schools when all is said and done. Wake doesn't appear to be an option.

D.J. Reader: Local prospect D.J. Reader is from Grimsley H.S. in Greensboro. He already has an unbelievable 340 pound frame and has several early offers. This is certainly one to keep an eye on, and will probably end up at one of the big SEC or ACC schools.

Camren Williams: Williams is an athlete who could probably play several positions, but he will be an inside linebacker. He's extremely well built and from what I've heard, he's an absolute terror for most defensive backs who can't handle his size and strength. His older brother is at UNC, but the Williams family was very impressed with Wake Forest during the recruiting process. Just recently heard that Maryland and Penn State are "recruiting him the hardest".

Armani Reeves: Armani is Camren's cousin, and is another talented wide receiver from Catholic Memorial H.S. Where Williams excels with his strength, Reeves is definitely more of the speed types. He is a deep threat on every play and has a number of impressive offers already.

Anthony Rook: A sleeper tight end prospect (if there is such a thing this early in the process), but Wake is his first offer. He's got good size at 6-foot-3. I spoke with him and will have the full story up soon, but Wake is his leader early on.

Jay Jay McCullough: For some reason this kid is labeled as an all-purpose back in the Rivals network, but at 6-foot-3 and 225 pounds I find that hard to believe. Wake got on him very early and that bodes well.

Graham Shuler: Story coming up tomorrow on Graham, but he'll have double-digit offers and my guess is that he goes to a school like Wake, Vanderbilt, Duke, or North Carolina.

Tyrece Jiles: I spoke with Tyrece over the weekend. This kid was very impressive at a recent Badger Sports camp, and Wake is his first offer. He might blow up soon, but being the first offer is always good.

Josh Banks: Big 3-4 DE out of Middle Creek H.S., this kid is going to be a good one. Another kid whose first offer is from Wake.

Ladarius Banks: You saw from the story the other day that this kid is high on the Deacs and has a great relationship with Coach Mac. This kid is really exciting and would be a huge get.

Sheldon Day: Warren Central H.S. has produced some big-time talent the last few years, and Day fits that mold. He's a monster defensive tackle prospect who will be a 20+ offer guy.

Carlos Watkins: Watkins is another big defensive tackle, and I chatted with him very briefly tonight. He's very excited about the offer from Wake Forest. More to come on this one soon. He has awesome size for an interior line prospect at 6-foot-4 and 275 pounds.

Jordan Watkins: A Rivals 250 to Watch defensive end prospect, he's got a huge list of offers early on. Really big kid at 6'5" and 260 pounds, he'll be quite a get for some program.

Carlos Wray: Wray is a shorter defensive end prospect who just picked up another offer from Duke. I haven't had a chance to speak with him yet, but hopefully I'll have more for you soon.

Tay Hicklin: This kid is a fantastic athlete. Wake is his first offer. I just spoke with him and he's impressed with the Deacs; he has visited before.