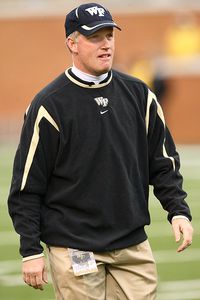 Wow, I mean, 2010-2011 really has been some kind of year for Wake Forest, huh? After a solid amount of speculating, it was announced today that Wake Forest defensive coordinator Brad Lambert will take the job as the first Charlotte head football coach.

The 49ers looked at a bunch of candidates and really took their time with this search before naming Lambert their guy. In his time at Wake, Lambert has seen the Wake program go from doormat to eventual ACC Champions along with two other bowl appearances (two wins). He worked with draft picks like Aaron Curry and Stanley Arnoux, and was the defensive coordinator for three seasons.

Obviously we wish Coach Lambert the best as he tackles this new challenge. As for the Demon Deacons, the search begins to find their new defensive coordinator. Will the promote from within, or start to cast a net out to get some new blood and a new philosophy into the program? As always, we'll keep you updated.