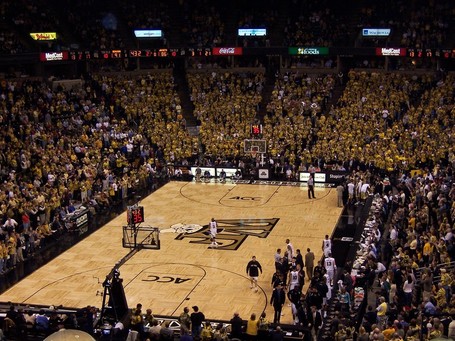 Wake Forest University’s men’s basketball practice on Monday, February 28 at the Joel Coliseum will be free and open to the public.

This will give fans a unique experience to watch head coach Jeff Bzdelik and his staff interact with the players in a practice setting rather than a game. I encourage all fans to head out and watch this because it will give a very personal look at what the team has been doing all year, and perhaps will answer many questions that fans have had about what goes on at practice.

Click through for details, and information if you are interested in heading over to the Joel to watch.

WINSTON-SALEM, N.C. – Wake Forest University’s men’s basketball practice on Monday, February 28 at the Joel Coliseum will be free and open to the public.

Fans attending the open practice should park in the Mountain Dew lot outside the Coliseum and enter through the Coliseum Administration doors to the left of the main entrance.  Fans are encouraged to sit in sections 107, 108 and 109.

During a Fan Forum held on January 28, Athletics Director Ron Wellman answered a fan’s question about attending a Demon Deacon practice by stating that Wake Forest would hold an open practice during the season.

During Monday’s practice, the Deacons will be preparing for the final home game of the year against Georgia Tech on March 3.  Tipoff for that game is scheduled for 8 p.m. at the Joel Coliseum.