Previewing Clemson-Wake with Orange And White

Share All sharing options for: Previewing Clemson-Wake with Orange And White 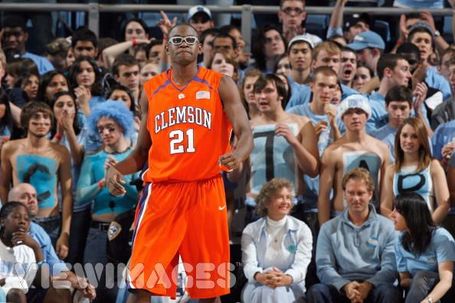 The Deacs are taking their talents to Littlejohn Coliseum on Saturday, hoping to pull off the upset over the Clemson Tigers. To get ramped up for the game, we spoke with Brandon from Orange And White (and over at ACCBlogger.com). Thanks again to Brandon and keep an eye out for our answers to his questions over at OAW.

1.) Assess the job Coach Brownell has done so far. Obviously you guys had a different situation than Wake did in that OP left on his own terms and you were (by all accounts) relatively satisfied with the job he was doing. How does Brownell stack up?

Coming from a relatively unknown school to Clemson fans, and having a number of transfers and injuries and replacing the key player for the last couple years for the Tigers’ program in Trevor Booker – Brownell had a lot to prove in his first season, and he’s done well. Purnell brought an exciting style of basketball that Clemson fans embraced, but it was also frustrating when he couldn’t seem to get the Tigers to that next level with NCAA Tourney wins. Brownell might not achieve that elusive win this year, but he’s shown enough signs in year one to give hope for them not to be far away.

2.) Talk a bit about recruiting. I know Sullivan is a terrific player. Who else do you see making a difference and are there any other prospects on the horizon?

Right now, Clemson has three guys coming in next year – Sullivan, 6’6 forward K.J. McDaniels and 6’3 guard Daniel Sapp. The forwards are the highest rated of the three, but Sapp’s impact will be the one to watch with all of the guard transfers from this season and the loss of seniors Demontez Stitt and Zavier Anderson. As for more for ’11 and future, Clemson is hosting another guard for this game in 6’3 Devin Coleman and already have a commit from 6’7 forward Jaron Blossomgame (3-star according to ESPN).

Just from Brownell’s background, his game will be developing and not necessarily bringing in the best of the best. Cory Stanton was an unheralded commit to Wright State and he brought him to Clemson – Stanton has played some minutes due to that lack of depth at guard, but has a ways to go to be a starter at this level. He will be an interesting player to watch as he progresses at Clemson during Brownell's career as a Tiger.


3.) It seems like the Tigers have been about as inconsistent as any other team in the ACC this season. What do you need to do to establish some consistency to finish the season? What has been the trouble in the losses?

It starts in the paint – Jerai Grant needs to be posting double-digit points, grabbing rebounds and getting blocks. He was invisible in the two losses to UNC, where the Tigers were right there in both. Stitt has to be constantly attacking the hoop and getting to the line. His aggressiveness feeds energy to the team. Another symptom of losses is poor perimeter shooting. When they are missing, they can’t seem to stop missing - like at NC State where they missed 17 3-pointers.

Andre Young. He’s one of a few guards on the team, and the best 3-point shooter. His shots raining down from deep get the whole offense kick-started. He also swarms on D giving a good model of a complete player.

5.) By the same token, Wake fans have a joke that some player will always have their career game against Wake. Who has the potential to be that guy on Saturday?

I’d watch out for Bryan Narcisse in this aspect – he’s a fan favorite because of the goggles and has two of the highest percentages on FGs and 3-pointers on the team. He’s also the best dunker of the Tigers - Narcisse might pick this one to go off.

6) Play out the game. What do you see happening? What's your final score?

Luckily for Wake Forest, the Tigers are coming off their worst home performance against UNC. Before that, Clemson was 5-0 at home with some of their best offensive performances of the year. The Deacs haven’t lost by less than 14 on the road yet in the ACC. I like Clemson’s D to disrupt Wake and lead to a number of easy baskets in a 75-59 Tigers win.