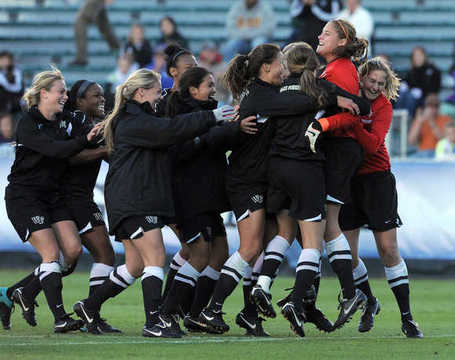 Congratulations to our women's soccer team for once again exhibiting everything that is right about Wake Forest athletics and academics. Way to make Wake Forest University proud, and demonstrate what the term "student-athlete" really means.

D’Agostino and Logue made the team for the second consecutive year, while Bledsoe, Luckhurst and Stengel were honored for the first time. Wake Forest has now had five players selected to the team on four different occasions since it was first named in 2005.

To be eligible for All-ACC Academic Team consideration, a student-athlete must have earned a 3.00 grade point average for the previous semester and maintained a 3.00 cumulative average during her academic career.

A native of Longmeadow, Mass., D’Agostino graduated in December with a degree in communication and a minor in entrepreneurship and social enterprise. After transferring to Wake Forest as a sophomore, she started 57 games for the Deacons, totaling seven goals and 13 assists. D’Agostino served as co-captain of the Demon Deacons in 2010, helping lead them to the program’s first ACC Championship. The midfielder is pursuing a professional career, and was recently drafted by the Philadelphia Independence in the third round of the WPS Draft.

Logue, a sophomore, was Wake Forest’s other co-captain in 2010, and has started all but two games for the Demon Deacons since arriving on campus two years ago. The defender boasts one of the highest GPAs on the team, has made the Dean’s List in all three of her semesters at Wake and this season was named to the 2010 CoSIDA/ESPN Academic All-District Second Team. The Mount Laurel, N.J. native delivered four assists this season and scored one goal – an overtime game-winner against NC State.

Always a strong performer in the classroom, Luckhurst distinguished herself on the pitch this season, starting 20 games and scoring three goals and seven points. The senior has made the Dean’s List in every semester and was named to the 2010 CoSIDA/ESPN Academic All-District Second Team. She also was recently awarded a Weaver-James-Corrigan ACC Postgraduate Scholarship. Luckhurst will graduate in May with a degree in economics and a minor in chemistry and is planning to pursue a career in medicine.

Stengel turned in one of the greatest performances in program history as a freshman in 2010, setting new Wake Forest single-season records with 16 goals and 37 points. She received numerous honors and awards for her phenomenal season, including ACC Freshman of the Year, All-ACC First Team, TopDrawerSoccer National Rookie of the Year and NSCAA Second-Team All-America. In early 2011 the Melbourne, Fla. native has already participated in two training camps with the U.S. U-20 National Team.

Few freshman are forced to start in net from Day One as Bledsoe was in 2010, but she was equal to the performance, earning ACC Tournament MVP honors after saving three Maryland penalty kicks in the ACC Championship Game to help the Demon Deacons win their first conference crown. The Cincinnati, Ohio native posted a 1.20 goals against average this season and recorded three shutouts. She was named to the Dean’s List in her first semester as a Deacon.