Share All sharing options for: Wake Forest student support: A Call To Arms 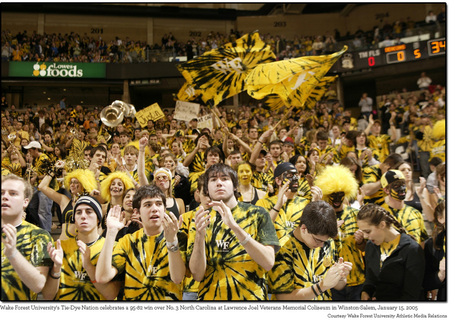 If Wake Forest loses to Virginia Tech and there's no one there to see it, did it really happen? The question must have been on the minds of any fan who was unfortunate enough to stumble upon ESPN2 during Tuesday night's game, as the Joel was nearly empty. Nowhere else was this absence more evident than in the end zone typically reserved for the Screamin Demon student section. The once proud Tie Dye Nation has deteriorated into the Tie Dye Village and it's something that absolutely must be addressed.

The marketing of a sports program is one of the more difficult requirements tasked to any university and athletics department, particularly in the midst of a bad season. There would be no objections to the statement that the 2010-2011 Wake Forest basketball season fits the billing of a poor season and the fans have matched the team stride-for-stride in poor showings at games. Most people realize that during these bad seasons that a lot of fans are not going to spend money to pay for parking, pay for concessions, and spend three or four hours of their night going to a home basketball game, even if they have already purchased season tickets. One of the more difficult things to swallow however, is the poor attendance of the student section. It is unrealistic to believe that every student is going to come to every game regardless of how well the team is performing, but it is equally as unrealistic that there would be less than one hundred students at even the worst ACC conference basketball game.

It is a difficult problem to address, and is one that has certainly been discussed ad nauseum by nearly every Wake fan this year. Interestingly enough these comments from the peanut gallery are derived from our very own graduates who are always happy to remind anyone that will listen that "during my day we went to every home game regardless of how much work we had to do". They also fail to mention that their four years at Wake Forest were during the Rogers, Childress, Duncan, Howard, Paul, or even the Teague/Johnson eras. I, too, get frustrated at the lack of attendance but I prefer to look at ways to address the problem rather than heaping blame on students who, quite frankly, just don't care about watching a bad team play.

There are a number of confounding factors and issues at play this year with regards to students and student attendance which makes the implementation of a new policy difficult to properly operationalize. Prior to the season there was a change to the old system of becoming a Screamin Demon. Students are no longer required to sign a contract stipulating that they will come to a certain number of games, but are instead ranked by a minute-based system where the top X number of students get the "best" seats at basketball games. This idea was part bad timing, part horrible idea. Under the "minutes" scheme, students swipe in when they arrive at games, and swipe out when they leave. Students are then ranked by the number of minutes accrued after football season (and various other picked sporting events) and placed in order for qualifying for basketball tickets in the lower level. But as one may have noticed at the Virginia Tech game, there were hardly any students there at all, entirely removing any incentive to come to games. In fact at this point it doesn't really matter if you paid the Screamin Demon fee at all since you can swipe into games with just an ID card. At least under the old system there was some sort of a contract which people may have felt some duty to abide by.

Of course there is also the fact that this is probably the worst season in Wake Forest basketball history. Regardless of the system utilized by the Screamin Demons and Sports Marketing, there were going to be fewer students at the game. Unfortunately though, this is not the first poor idea that Screamin Demons has come up with even in the previous two years, as the "pews" debacle still rings fresh in my mind. The problem lies with the way Screamin Demons is organized. There needs to be an influx of new ideas and fresh perspectives. Instead of having a cabal of executives, perhaps biweekly meetings or an actual group meeting of any interested Screamin Demons where ideas can be exchanged could be established. I do not fault the executive committee for failing to get students to the games, but it is frustrating at times to see the responses to the current problems and hear ideas fall on deaf ears.

I have personally suggested several times, both via email and through members of the executive committee, that one of the biggest issues to resolve with regards to the student population is the issue of fraternity and sorority attendance. Nearly every student who regularly attends a Wake basketball game is non-affiliated with Greek life. Since roughly half of the Wake Forest campus is a member of a Greek organization, this is clearly a large problem. My personal solution was to include attendance at both football and basketball games as part of the competition between fraternities and sororities. I do not personally know who is responsible for the way the cup is structured, but I would find it difficult to argue that adding attendance at university sporting event is an unfair addendum to the competition. Even if the frats just sent their pledges or the sororities sent their new members, there would be a large increase in the student population.

If Wake is truly serious in increasing student participation, why not offer a one hour pass/fail credit where students can sign up pledging they would go to a certain number of basketball games, and if they do not honor their word they fail the course. This may sound "extreme", but it wasn't too long ago that some universities required that students attend church services once a week as part of a "course".

The biggest problem is of course that the team is not winning. Not only is the team not winning, the team is not competitive. Whether you like Bzdelik or not, it is difficult to argue that anyone is too interested in going to watch Wake games this year simply because they are not remotely entertaining. However, students should be interested enough in their university and their peers to attend basketball games, and Wake Forest should be undertaking a more proactive role in ensuring that students show up. It is not only embarrassing for the university to lose on national television in the manner we did against Virginia Tech, but it has to be hurting our recruiting and our image to hear analyst Mike Patrick comment several times in the first half about how quiet the Joel is.

It was only two years ago that Wake hosted and beat North Carolina and Duke in a three week stretch in front of what were some of the most raucous crowds in not only recent memory, but dating back to the Paul and even the Duncan days. Wake Forest basketball will improve at some point and return from college basketball oblivion, but my biggest fear is that perhaps the students will not. The days of Wake Forest being known as having a great student support section are gone, and perhaps this change of culture in the students is one that is here to stay. Even if you don't believe that our coach deserves it, our student-athletes deserve support from their peers.