Pomeroy Bracketology: Down the Stretch They Come

Share All sharing options for: Pomeroy Bracketology: Down the Stretch They Come 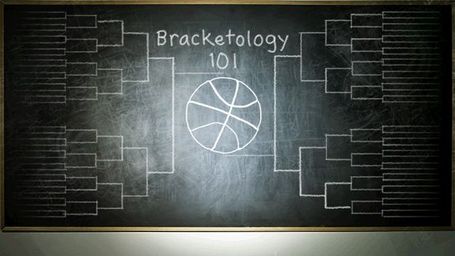 Welcome to the latest installment of Pomeroy Bracketology. We have finally reached the point in the season where it is time to start using personal forecasting instead of simply Pomeroy ranking. Using the Pomeroy game-by-game projections, I played out the final 2 weeks of the regular season and all 31 conference tournaments. Click through for the latest bracket based on these results, complete with a conference breakdown and analysis of each team in the field.

Before we get to the full bracket, here is a quick snapshot of the bubble:

Bid Breakdown by Conference (All unlisted conferences did not receive an at-large bid):

And here's the bracket, broken down by seed. Remember, all projections are the event most likely to occur based on Pomeroy ratings. The team's seed in Lunardi's latest bracketology is in parenthesis.

2 Seeds:
Texas (1): Losing to Kansas in the Big 12 final costs the Longhorns a #1 seed
BYU (2): Obvious 2-seed after sharing the MWC regular season title and winning the conference tournament
San Diego St (2): Aztecs remain a 2 seed despite a loss to BYU in the MWC final
Purdue (2): Purdue is the clear #2 team in the Big 10, beating Wisconsin in the conference semis

3 Seeds:
Syracuse (5): Orange move up to the 3rd line after reaching the Big East final, upsetting Notre Dame and Georgetown in the process
Wisconsin (3): Badgers hold as a 3 seed, giving Purdue a close game in the semis
North Carolina (4): The Tarheels rise to the 3rd line, finishing the season on a 13 game winning streak against teams not named Duke
Georgetown (3): Hoyas are a clear 3 seed after reaching the Big East semis and finishing 3rd in the regular season

4 Seeds:
Notre Dame (3): Finishing the season with back-to-back losses (@UConn, Big East quarters) drop the Irish a line
Kentucky (5): The ultra-talented Wildcats finally put everything together down the stretch, winning the SEC tournament
Louisville (4): Louisville remains a 4 after reaching the Big East semis
Florida (3): Winning the SEC regular season title keeps the Gators from falling too far after losing to Kentucky in the SEC semis

5 Seeds:
Connecticut (4): Huskies fail to pass Villanova or Notre Dame after losing to Pitt in Big East quarters
Washington (7): This group of Huskies rises to a 5 by finishing the year on a 7 game winning streak and winning the Pac 10 tournament
Arizona (5): Wildcats remain a 5 after reaching the Pac-10 tournament final and winning the regular season crown by multiple games
Vanderbilt (5): Vandy holds strong as a 5, losing a tight game to Kentucky in the SEC final

6 Seeds:
Villanova (4): Cats drop a couple lines after losing the last two games of the regular season and losing in the Big East quarters
George Mason (7): No Cinderella story for George Mason this year; Patriots rise to a 6 closing the season with an 18 game winning streak
Temple (7): Owls rise a line after winning the A14 conference tournament and sharing the regular season title
Missouri (7): Missouri moves up a line by reaching the Big 12 semis

7 Seeds:
St. John's (6): Johnnies have too many big time wins to drop any further, despite a loss in the Big East quarters
Illinois (8): Illini move up by beating Minnesota in a Big 10 quarterfinal
Xavier (6): X swaps seed lines with Temple after losing in the A14 final
West Virginia (6): Mountaineers don't drop too far despite not even reaching the Big East quarters

8 Seeds:
Texas A&M (6): Aggies drop after being upset in the Big 12 quarters by Nebraska
Utah St (9): The WAC is no match for these Aggies. Utah St will enter the tournament with a 31-3 record
Cincinnati (8): Winning record in the Big East regular season is an automatic tourney invite this year, as it is most years
Alabama (10): Alabama should wear white for their first game after winning the SEC regular season title

9 Seeds:
UNLV (9): UNLV will make the tournament despite being swept by BYU and San Diego St
St. Mary's (10): 3-0 against Gonzaga earns St. Mary's a 9 seed despite the home loss to Utah St in the Bracketbusters headliner
Kansas St (9): Jacob Pullen can breathe a sigh of relief after making the Big 12 quarters
Georgia (10): Winning record in a major conference? Check. Bulldogs get in even with a quarterfinal loss

10 Seeds:
Virginia Tech (11): Seth Greenberg has to sweat out Selection Sunday once again after a quarterfinal loss to Maryland, but this time the Hokies are on the right side of the bubble
UCLA (9): Bruins return to the tournament despite major struggles down the stretch
Tennessee (8): Vols drop 7 of their last 10, but SoS and big time W (@ Pitt) keep them in the field
Old Dominion (10): Monarchs capture an at-large by reaching the CAA final

11 Seeds:
Marquette (11): Marquette earns an 11 seed as Big East #11
Nebraska (NR): Cornhuskers grab a bid after upsetting Texas A&M in the Big 12 quarters
Minnesota (12): Gophers barely withstand a loss to Illinois in the Big 10 quarters
Butler (11): Last year's Cinderella team finds themselves back in the tournament after closing the season on a 9 game winning streak until the Horizon final

12 Seeds:
Wichita St (NR): (Future NC State coach?) Gregg Marshall leads Wichita St into the tournament after winning Arch Madness, beating Missouri St [Lunardi: 12] in the final
Belmont (12): Belmont deserves much better, but with 0 top 100 wins, they'll probably end up in a 5-12 game. I feel bad for that 5.
Michigan St (11): Spartans sneak in, despite losing 4 of 6 down the stretch
Clemson (NR): Clutch ACC quarterfinal upset of Florida St earns the Tigers an at-large bid, date with Michigan St in Dayton
Cleveland St (12): Cleveland St's HCA in the tournament final proves pivotal as they defeat Butler in a nailbiter.
UTEP (13): The Miners take advantage of HCA and win the CUSA tourney in a great final against UAB. (A grossly overrated Memphis team flames out early, ending any at-large discussion)

13 Seeds:
Richmond (12): Spiders earn a spot in the "First Four" after finishing 12-4 in the A14 regular season
UAB (NR): Blazers earn the last at-large spot, reaching the CUSA final
College of Charleston (13): Andrew Goudelock finally earns a well-deserved trip to the Big Dance
Oakland (13): Oakland won't sneak up on anyone after a win @Tennessee

14 Seeds
Bucknell (14): Bucknell earns a 14 after hardly being challenged on their home court in the Patriot league tournament. Win @Richmond does wonders for seeding.
Harvard (14): Harvard earns the auto bid after defeating Princeton is a one game playoff on a neutral floor (this game needs to be on TV with Gus Johnson announcing).
Coastal Carolina (14): No surprise here. Coastal Carolina breezes through the Big South tournament
Iona (NR): Iona upsets Fairfield [Lunardi: 14] to win the MAAC.

15 Seeds
Buffalo (NR): Bulls pull a couple upsets in the MAC tourney. [Lunardi has Miami OH as a 16]
Vermont (15): Not a vintage Vermont team, but they fly through the conference tournament easily
Montana (15): Montana defeats Northern Colorado to win the Big Sky tournament on its own home court
Long Beach St (15): Long Beach St defeats Pacific in the final to win the Big West

16 Seeds
Texas Southern (16): SWAC champ is a lock for a play-in game
Hampton (NR): See above, just change SWAC to MEAC [Lunardi has Bethune-Cookman as a 16]
Denver (NR): Denver wins the wide-open Sun Belt tournament. Another automatic 16 seed [Lunardi has Florida Atlantic]
Stephen F. Austin (NR): Best of the 4 auto-bid play-in participants. [Lunardi has Nicholls St as a 16]
Morehead St (16): Don't expect the OVC to win a game in this year's tourney. Kenneth Faried will be a #1 seed's nightmare though
Long Island (15): 14-17 last year, 22-5 (so far this year). Great turnaround, but don't have any wins to merit higher than a 16.

And, just for the halibut, for those wondering about Wake Forest:

If Wake won the ACC Tournament, beating, say Maryland, Virginia Tech, Duke, and Carolina, the Deacs would be around a 14 seed in my opinion. By my back-of-the-envelope calculations, Wake has about a 0.00012% chance to win the ACC title.