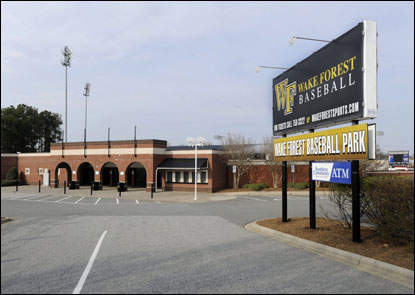 We here at Blogger So Dear hope to get out and cover some games live this year for the Diamond Deacs. We have been a bit slack on coverage due to work schedules, and basketball dominating the front page, but we will certainly do our best to keep the fans updated and make this THE place to go to for the Deacs baseball team.

Click through the jump to for links about this weekends matchup with the nationally ranked LSU Tigers.

Baseball Game Notes - Wake Forest at LSU - WAKE FOREST OFFICIAL ATHLETIC SITE
Under the guidance of second-year head coach Tom Walter, the Wake Forest baseball team will begin the 2011 season on the road against LSU at Alex Box Stadium. Friday will mark the first-ever meeting between the Demon Deacons and the Tigers. The Demon Deacons will look to rely on a mix of youth and experience to help improve its 2010 record of 18-37 and continue its momentum from the end of last season. Wake Forest won six of its last eight games in 2010, including two victories over College World Series participant Clemson at home.

LSU coach wants Alex Box Stadium to be friendlier | shreveporttimes.com | Shreveport Times
LSU, either at the old Box or the new Box that opened in 2009, has led the nation in attendance the last 15 years. Of the 24 NCAA Regional or Super Regional postseason tournaments LSU has hosted in the Box, the Tigers have won 21. "Truly the best college baseball venue in the country, bar none," said Wake Forest coach Tom Walter, a former University of New Orleans coach who was 1-4 in the Box from 2005-09. "It will be unlike any environment our kids have ever played in."

No. 22 LSU kicks off season tonight against Wake Forest - The Daily Reveille - Sports
The weather is warmer, the sun is brighter and Alex Box Stadium will soon be packed. It's baseball season in Baton Rouge. Senior pitcher Ben Alsup will start Friday as the No. 22 LSU baseball team opens the year against Wake Forest. "It's going to be electric," said LSU coach Paul Mainieri. "The big tiger in the sky is certainly taking care of us with the weather."

Deacons baseball season to open with a bang | JournalNow.com
Preseason for the Wake Forest baseball program was dominated by the unforgettable story of Coach Tom Walter donating a kidney to freshman Kevin Jordan, who had yet to play his first game for the Deacons.