Share All sharing options for: Interview with 2012 Recruit Aaron Rountree 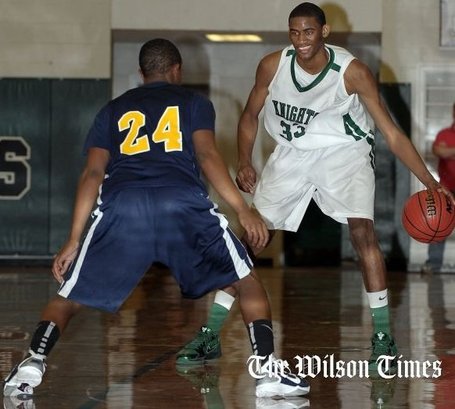 Blogger So Dear caught up with 2012 recruit Aaron Rountree earlier today. We chatted about his basketball team this year (Greenfield High), how the recruiting trip to Winston-Salem went this weekend, a bit about his game, and the schools that are after him.

Rountree is 6'8, 190, and has received a plethora of offers from D1 programs. He is an enthusiastic player both on and off the court. Despite being a UNC fan (Just kidding Aaron!), he is a high-character, intelligent person who is going to be a great fit for the school that winds up with him.

Click through the jump to see what Aaron has to say about Wake Forest.

1. How is Greenfield doing this year? How are you doing individually?

Greenfield is going great! I love the school, my teammates, and my coaches! We're having a good year so far! 21-8, undefeated in conference, and #3 in the state! Should have a great shot at making it deep in the playoffs next week and winning states! Individually I've been having a good year on both ends of the floor and should have a great shot at making all-state!

2. You took a visit to Wake Forest this past weekend. Can you talk a little bit about how that went? Anything that you liked/disliked about it?

The Wake Forest visit was great! Loved everything about it, especially the smaller college environment! I feel like it would be an easy transition from Greenfield to Wake. I also like the idea of getting a great education while also helping return the program to success it had in past years.

3. Who is pursuing you at this point? Do you have any clear cut favorites right now?

I have offers From Wake Forest, Colorado, UNC-G, UNC-W, Elon, VCU, Mercer and Tennessee-Chattanooga. I have interest from Clemson, UVA, VT, NC State, UNC-C, Harvard, Notre Dame, and ECU. If I had to choose a favorite on the spot it would be between Wake Forest and Colorado, just because of the excellence in academics and basketball and the chance to play big time ACC or Pac-12 basketball.

4. If you had to describe you game to somebody who hasn't seen you play before what would you say? Strengths/weaknesses?

If I had to describe my game to somebody who has never seen me play I would tell them I'm a point forward or small forward type player. I play as hard as anybody you'll ever see play and I do whatever it takes to help the team win. My strengths would definitely have to be my length, versatility, basketball IQ and unselfishness. I don't really think I have any glaring weaknesses, but I have to get more consistency on my jumpshot and get stronger to play with the physicality of college basketball, but by the time 2012 rolls around that won't be a problem.

5. Favorite college growing up and why?

I grew up a die-hard UNC fan and until I commit to another college, I will remain a UNC fan! I grew up watching the UNC greats like Stackhouse, Wallace, Vince Carter and who can cheer against Jordan's alma mater?

6. Has Wake Forest being down this year influenced your opinion on whether or not you want to go there?

No, Wake Forest Is down because they're going through a coaching change and a change in style of play. They're also playing a lot of Freshmen and Sophomores, which is always sure to come with bumps and bruises (I.E. Kentucky). I see the future and where the program is heading and it excites me. The building blocks are in place, with a good 2011 class, and a even better 2012 class (maybe even including yours truly) Wake Forest University will be fine.

Thank you very much Aaron, and we hope to talk with you again soon!