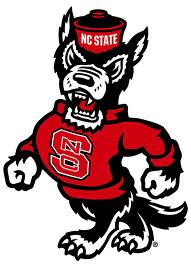 Both teams are in a free fall right now. The loser of this game could easily get last place in the conference. It is hard to say which team has had the more disappointing year up to this point given the expectations of each fan base. It is safe to say that if Sidney Lowe loses this game, he will more than likely see his contract terminated (if it hasn't been already). Let's get us one Deacs!!!

Click through the jump for NCSU team and individual stats, plus predictions from around the web and myself.

N.C State has struggled tremendously getting shots to fall this year, yet they rank 80th in the nation in adj. efficiency, at 1.07 ppp. That is extremely difficult to do, and is actually a testament to their offensive rebounding and ability to hold on to the ball, which is represented in the chart above as well. They protect the ball well, but don't get a lot of steals. They also rebound well offensively, but do not rebound well defensively. I haven't seen enough of State this year to know if it is related more to the philosophy of the team, or if they are just inconsistent (as young teams are). I would garner that it is a little bit of both.

The Pack are shooting just 33.2% from 3-pointers, and 47% from inside the arc. No successful team is ever going to shoot the ball that poorly. They are in the middle of the table in steal and block %, both offensively and defensively.

Predictions
KenPom- NCSU-79 Wake-72 (73%)
Vegas- Will update as game gets closer
My Prediction- Wake-76 State-75
My stats are telling me State 75-73, but I'm going to give the nod to Wake in this pillow fight. We saw significant improvement against Miami on Wednesday night. It was a heart-breaking loss, and I think that the guys really got out there and put in work in practice. Both teams are on free-falls, but I feel like we have a silver lining to look at in terms of getting better and improving, while State is feeling sorry for themselves for the year that they have had so far.
I think that Coach Bzdelik coaches these guys up, particularly inside and we get one at the Joel. JT Terrell is really coming in to his own, and I expect a big night from him (not necessarily numbers-wise, I mean doing all the little things that we need to do to win). I am also going to go out on a limb and say that Carson and Ty have a good showing against Tracy Smith. If we can get good games out of these three guys, and CJ continues what he has been doing since Tony Chennault got back, I think we are in business.
Go Deacs!