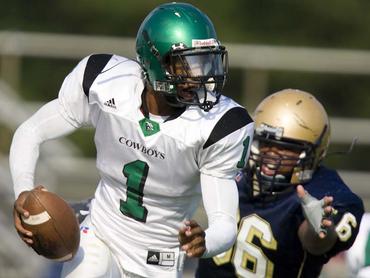 Shocking news: 3* recruit Airyn Willis, from Southwest Guilford H.S. is reportedly decommitting from Georgia Tech and is "99.9 percent sure" he will be a Demon Deacon come signing day.

Willis is a QB that will be making the switch to WR and would be a huge coup for the Deacs who lost Curt Evans to Boston College earlier in the recruiting season.

The News And Record reports:

"I think it just boiled down to where he wanted to play position wise," Christman said. "At Wake they’re going to play him in the slot. At Tech they want to play him at split end. … In his mind, he is going to be able to meet his athletic potential more at Wake than at Tech."

Willis is a terrific athlete and his game should translate well to the WR position. He possesses good speed, reach at 6'2" and makes good cuts in the open field. He's one of those "athlete" types that could run the option if Wake goes into a Wildcat scheme, run reverses and could be a dangerous downfield threat as long as he works on his catching ability.

EDIT 2:58PM: Apparently, there are conflicting reports and this is not a done deal. Chip Towers of the Atlanta Journal Constitution:

Airyn Willis' coach at SW Guilford disputes report that quotes him saying Willis will sign with GT. Says still headed GT as far as he knows.less than a minute ago via web

EDIT 3:44PM: Jason Wolf of the News & Record had this to say about the story:

@RAJohnston12 @MartinRickman @ACCSports The N&R stands by the report. SW Guilford football coach, AD both said Willis to Wake Forest.less than a minute ago via web

We'll definitely be monitoring the situation to see how it plays out.

In the meantime, here are a few YouTube clips of Airyn after the jump, and I must say, I'm extremely excited about his upside and playmaking.