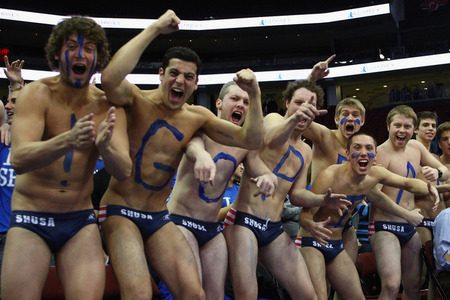 To take a break from doing some studying, I took a look at Seton Hall's game against Auburn on ESPN3 (yay technology). Just some general thoughts are posted below. If there are any questions then feel free to comment!

It looks at first glance as if Seton Hall plays a normal "one guy down low" offense, but Pope can also get down and bang around. Auda can also get out and move around as well. This is probably going to cause us some problems unless if Walker and Desrosiers step up big time.

Overall I feel like we can hang around with the Pirates if we take care of the ball against their high intensity defense, prevent Pope from getting 25 and 20, and be patient on offense to get shots that we like. I think we can do 1 and 3, but I am really concerned about what Herb Pope is going to do to us. He is averaging 21 and 11 on the year, and is just a physical specimen that is extremely athletic. Travis, as well as the rest of the team, is going to really have his work cut out for him on the defensive end.