Share All sharing options for: Talking UNCW -- Wake Forest With Brian Mull Of The Wilmington StarNews 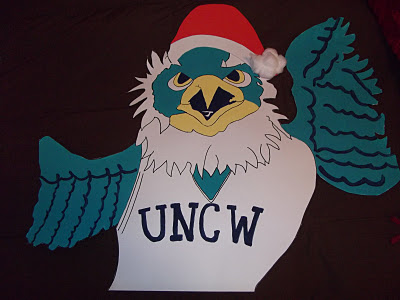 For this week's Q&A, Blogger So Dear welcomes Brian Mull (Twitter: @BGMull), Seahawks beatwriter for the Wilmington StarNews. Brian answered our questions on his blog (a good read for even casual CAA fans). Mull chases his beat as well as anyone in the nation, and has embraced statistical analysis the last few years, focusing a lot more on efficiency to talk about teams. The Deacs lost the game to UNCW in embarrassing fashion a year ago, so motivation should be no issue.

Brian talks super rebounder Keith Rendleman, UNCW's new go-to guard in Adam Smith, pressuring the Seahawks and more in the Battle of the Buzz after the jump...

1.) Keith Rendleman has been a revelation this year. He is finishing shots, doing work on the offensive glass and being a calming influence on a team that needs it badly. What has he done to elevate his game? What can be attributed to him being much more of a consistent player?

He's stronger, and healthy, fully recovered from a knee injury that limited his athleticism in the last month last season. He's also diversified his offensive game, showing more confidence in his 12-15 foot jumper. Still, Rendleman's greatest attribute has always been his motor. He outworks most post players he faces.

2.) People paying attention knew that Adam Smith could fill it up. He averaged a ton of points in high school and in a lot of ways will remind Wake fans of freshman Chase Fischer. Was Smith underscouted? What makes him so effective? What can he improve on?

I think he's at the perfect level. He could've been a role player in the ACC or SEC, but he's not wired that way. Smith wants to be the go-to guy and it was important to he and his family that he attend a school where playing time was available right away. His dad wanted him to go to George Mason, but he picked UNCW, and there was certainly ample playing time available here. He's fast, athletic, has a pure jump shot and most important a scorers' mentality. He needs to get stronger and be more physical on both ends of the floor.

3.) Speaking of freshmen, there are an awful lot on this UNCW team. Coach Buzz Peterson had a lot of work to do, and went for it, grabbing eight in 2011. Obviously with this much youth, there is a learning curve and you sometimes don't know what you're going to get. Talk a little bit about the class as a whole, and the recruiting going forward.

It's an excellent class. Peterson and staff filled all their needs, really upgraded the skill level and overall athleticism in the program. They landed winners from successful high school programs. UNCW will likely start four freshmen against Wake. All of those players will play a ton of minutes at UNCW.

The two kids redshirting, Hager and Ponder, are very talented as well, and will help balance the classes. They'll join the lone 2012 signee, C.J. Gettys (7-0, 275) from Ohio. He has good hands, is mobile for his size and is aggressive around the basket.

Like every incoming big man at a mid-major school, he needs to get stronger and embrace contact in the paint. UNCW also has a commitment in the 2013 class, Logan Adams, a three-star SF from Georgia, who is ranked No. 29 at this position by ESPN.

4.) Holy Press, Batman. VCU put a little pressure on the Seahawks on Saturday and UNCW crumbled, committing a bevy of turnovers and never getting into a flow on the offensive side of the ball. Was this the first good press that the Seahawks had faced all year? Why wasn't the team ready for VCU's length in the passing lanes? Do you see the Demon Deacons attempting to replicate this success?

It's difficult to simulate the VCU pressure and the Seahawks had not seen anything similar prior to that game. UNCW tried practicing 5-on-6, but VCU has high-major length and athleticism at every position, one factor that contributed to their Final Four run last season. And this '11-12 VCU team is better defensively, more suited to play Shaka Smart's Havoc style than that team.

The entire scene was too much for the Seahawks. The Siegel Center was sold out and rocking, and the Seahawks were coming off of exams. Also, K.K. Simmons, who is more of a combo guard, moved over to point guard when Ponder's season ended due to an ankle injury. He's been solid, but Smith was the only UNCW ballhandler who handled the pressure that night. Peterson expects to face more pressure in upcoming games.

5.) We like to say that every time an opponent plays Wake, someone has a career game. It usually comes from a second or third scorer, or an even more unlikely place. Who is the x-factor in this game for Wilmington? Who else should we be keeping an eye on?

You're right. Donte Morales came out of nowhere and had a big game in the Seahawks win over Wake in Greensboro last season. I think Cedrick Williams, the freshman post could be productive. He's had consecutive games where he was very active on the glass. He has a high motor and is a good athlete. Freddie Jackson is another player with the potential to make plays in the open floor. He's been contributing in other areas and is due to have a good scoring game.

6.) Play the game out. How do you see it going down? What's your final score?

I think UNCW will have Wake's full attention this season. You have to wonder if a young team like UNCW will be looking ahead to the goodness of Mom's cooking, Santa Claus, a couple of days on the couch and maybe, even, a girlfriend from the past. Wake 72, UNCW 65