Share All sharing options for: Wake Forest Women down Lenoir-Rhyne 102-39 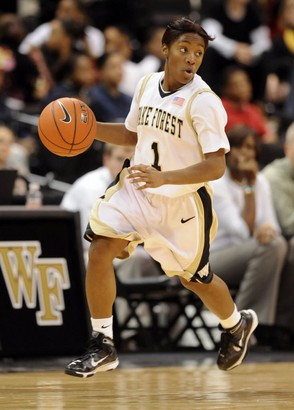 Lenoir-Rhyne wasn't expected to bring much of a challenge to the Wake Forest women's basketball team in the first exhibition game of the season, and they didn't, as the Deacs got out to a quick start and never let up en route to a 63 point victory.

I'm sure Coach Petersen wasn't happy with some of the things that he saw on the court (rebounding for stretches, help defense on the baseline, some careless turnovers), but with a 102-39 victory, it is hard to be too critical of your team.

Freshman Dearica Hamby showed why the Deacs were lucky to grab her, as she put up 18 points and 9 rebounds in just 14 minutes of play. She was very active all over the court, and has the ability to push out on defense and close down the passing lanes on the perimeter.

Click through the jump for more of the breakdown and observations from the first exhibition of the year.

In front of a sparse crowd, the Deacs used a swarming defense to force 30 turnovers from the Bears (21 steals).

Coach Petersen mixed up some man to man with a 2-3 zone throughout the game as players were rotated in and out.

There is a bit of work to be done in the 2-3, particularly down low. Since the defense extends pressure, sometimes even beyond the 3-point line, the help defense at the baseline has to be sharp. While the stats looked pretty good, there were some late switches, lack of communication, and just things that one would expect to occur in the first game of the year.

In addition to the brilliance of Hamby, there were several other good performances from the team:

The Deacs shot 43.4% from the field (36-83), including 39.1% from behind the arc (9-23). The 39% is 12 percentage points higher than last year's 3-PT%, and Coach Petersen has to be happy with that number.
While the Bears clearly did not have the talent that Wake Forest had, they put forth a great effort, and that showed on the boards. The Deacs only outrebounded the Bears 58-49, and there were several stretches were Lenoir-Rhyne had three or four opportunities to score the ball after missed shots. Krystal Patton led the Bears with 11 points, and 8 rebounds on the night.
The Deacs return to action on Monday, Nov. 7 at the LJVM, as they take on Tusculum at 6:30 in the 2nd and final exhibition.
I'm sure Coach Petersen will continue to tinker around with the lineups, as he searches for the one that will allow his team to get up and down the floor as he likes. I am almost positive that Dearica Hamby will fit into that lineup somewhere, but she is going to have to get conditioned to fit into the style of play here.
Overall, a very strong effort for the Deacs, but plenty that they can improve upon as the regular season quickly approaches.