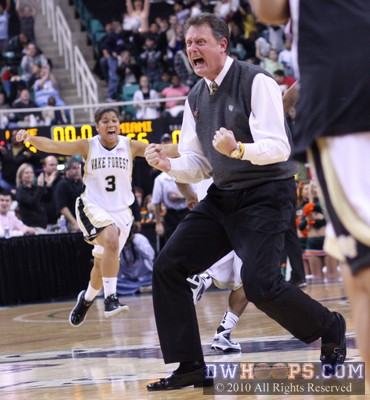 This season I plan on keeping up with them on here, as well as attending many of their games. While I know that everybody may not be as keen on reading these articles as they are about football and men's basketball, the women's team has a shot to be pretty good this year.

Anyway, the season opens up tonight with an exhibition game against Lenoir-Rhyne at 6:30. I would encourage anybody that can make it out to do so (not just tonight, but the rest of the season as well). Coach Petersen's squad has worked tremendously hard in the offseason, and return four of five starters from a team that went 15-17 last year. That sets the Deacs up for a possibility at an NCAA Tournament run, which would be awesome for the ladies!

Click through the jump for a full schedule, roster and a look at the women's team this year.

Overall, I am excited about the prospects of the season. I think that Coach Petersen has done a great job establishing a base for the program to build off of, but it is time for the team to get the results and the tournament appearances. I look forward to covering the them this season and talking with Coach P, because he is one of the good guys in the coaching industry that really cares about his players.