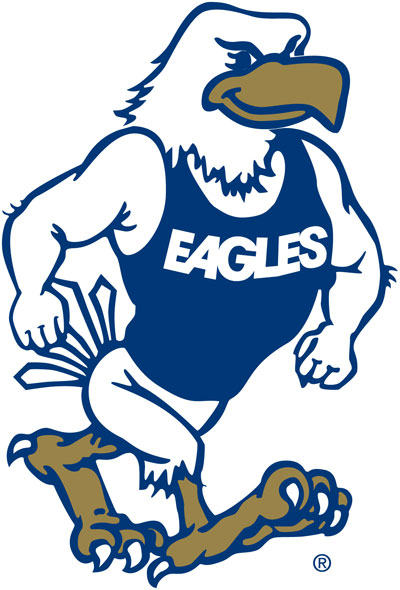 Wake Forest basketball returns to action on Wednesday night to take on the Georgia Southern Eagles of the Southern Conference. The Deacs are coming off a season-opening 75-63 victory over the Loyola Greyhounds, while the Eagles are seeking their first win of the year after starting the season with a 90-81 loss at home to Valparaiso.

The game is set to tip off at 7 P.M. at the LJVM in Winston-Salem, so come on out if you're in the area as tickets should be pretty cheap before the game. This one will be aired on television on RSN in the North Carolina area and on ESPN3 for other viewing areas.

In the interest of providing the most important facets first in a rundown of Georgia Southern I feel it's integral to point the fact out that, well they're just not really that good and this game shouldn't really be close at all. 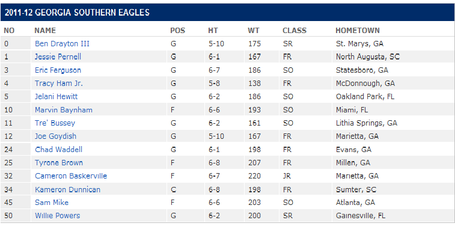 The Eagles started their season with a tough 90-81 loss at home against the Valparaiso Crusaders. Georgia Southern only trailed by 5 at halftime but couldn't cut into the deficit into the second half. Eric Ferguson led the Eagles in scoring with 20 points along with 13 rebounds inside in just 27 minutes. With Ferguson getting the job done inside, the starting backcourt provided a lot of help as well providing 42 points between Powers, Hewitt, and Drayton III.

Georgia Southern's largest concern through one game is the rate at which they turn the ball over. 26.2% of their possessions ended in a turnover, yet they also do a very good job of forcing turnovers (20 in the season opener). The major struggle for the Eagles this year will be on the defensive side of the ball where both last season and in the season opener, they struggled to get stops. Georgia Southern fouls a considerable amount (15th most of any team in the nation in 2010) and is bad at preventing second chances for other teams as they gave up 16 offensive rebounds against Valpo in the season opener.

Ken Pomeroy's four factors are a set of indicators and statistics that we like to use at Blogger So Dear to get a good feel for a team and how they stack up with the NCAA average. The left column is Ga. Southern's offensive output, the second column is how teams have fared against Ga. Southern (or the Eagles' defense) and the far column is the aforementioned NCAA average for the statistic.

For a refresher here is how these stats are determined and what they represent:

Free throw rate: This is now FTA/FGA for both the offensive and defensive values.

Now these numbers right now are relatively meaningless as they just represent a small sample size (the one game that the Eagles have played) but as the season goes along and n increases, these numbers will represent trends for teams, as well as provide context as to how good or bad the team is in that area. Since these stats don't really mean anything right now I've simply provided them as an initial glance at Georgia Southern but won't really go into much more discussion about it.

1. Who will win the battle inside? Both teams were able to get the ball inside in their first game and establish some points in the paint. For the Eagles to have a chance and pull the upset in this one, they will need to continue to pound the ball inside, cut down the number of second chance baskets Wake has on the other end of the court, and get Wake's defense to collapse for easy passes to the perimeter opening up shots from outside. The Eagles were 6-11 from behind the arc against Valpo, a number which will need to remain high for the game to be close. Wake on the other hand had a fantastic performance inside against Loyola from Carson Desrosiers who had the best game of his college career with 8 points, 10 boards, and 8 blocks in Wake's opener.

Travis McKie will more than likely record more than the 4 rebounds he did against the Greyhounds and Georgia Southern's ability on the defensive end to stop him from getting inside for buckets and boards will most likely play the biggest role in determining the outcome of the game. If I'm the Eagles, I'm doubling McKie every time he touches the ball in the lower block and forcing him to pass out to make a play. If Wake plays like they did against Loyola, the Deacs will likely win this inside battle against the smaller Eagles.

2. Three point shooting: As I alluded to earlier, the Eagles shot a solid 6-11 from outside the arc in their first game of their season. For teams attempting to pull of early-season upsets on the road, it is critical to hit threes since the majority of these misses will be snatched up for defensive boards. Wake will more than likely come out in man with a surplus in talent at nearly every position, potentially making it difficult for the Eagles to work the ball around for open shots. Georgia Southern will need to be able to set some high screens and roll their guards like Hewitt and Drayton III off of them for some open looks in order to be successful. Wake held Loyola to 1-14 from behind the arc. Some of this was Loyola not being able to hit anything, but a lot of it was forcing tough shots with hands in the shooter's face.

3. Eliminate dumb mistakes: Both teams turn the ball over, a lot. This isn't really a surprise since both teams are young, coming off horrific seasons, and it's still early on in the year. Georgia Southern turned the ball over 19 times against Valpo while Wake turned it over 16 times against Loyola. Wake will need to protect the ball on offense when Drayton III is around as he averaged nearly 2 steals a game last year. I can't really speak for Georgia Southern since I don't know if I've ever seen them play ever, but I'm guessing that they have a few unforced turnovers a game (including bouncing the ball off the dribbler's foot, dropping passes inside that bounce out, and just throwing the ball to the other team) and we all know that Wake has a proclivity for inexplicably turning the ball over (i.e. McKie dribbling the ball out of bounds in the Loyola game). Whichever team can cut down on these mental mistakes and take care of the ball will probably have an upper hand in the matchup. I expect the game to come down to turnover margin, and ability to hit high-percentage shots from the low block while playing good defense outside.

Wake isn't the greatest team of all time and still have a lot of work to do, but are certainly headed in the right direction if the win over Loyola was any indication. Wake had to work hard against a scrappy team who had a solid gameplan and was relatively unlucky (and dumb) to have one of their best players foul out with 9 minutes left in the game and see any chance they had of winning dissipate. That being said, I expect Wake to dominate this one. Georgia Southern is not a good basketball team. On the offensive side of the ball they're pretty bad, on the defensive side of the ball they're horrific. If Wake is unable to get things going against this team and run their offense while playing solid defense as one would expect, we are going to be in for a long year.

I like McKie and Desrosiers to both have solid rebounding games while Green has a good game off the bench. Wake's motion offense has looked good over the first couple of games and I expect this to continue against an overmatched Eagles team.

As always, comments/criticisms/corrections/concerns are all welcome and encouraged. Go Deacs!