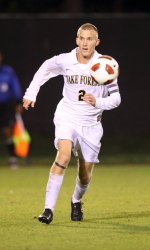 The Wake Forest men's soccer team did enough this season to earn a berth to the 2011 NCAA Men's Soccer tournament. The Demon Deacons will take a short drive south to face South Carolina in Columbia. It will be the second time the Deacons have traveled to Columbia this year, but the first game was cancelled due to lightning after the Wake team arrived.

Wake Forest received one of 26 at-large bids after finishing the season with an 8-7-4 record, including a strong finish to the regular season with draws against Maryland and Akron before falling in the first round of the ACC Tournament in double-OT to Virginia. The game will take place on Thursday, November 18 at 7 P.M. If the Deacons win the contest against the Gamecocks they will advance to face nationally ranked James Madison in Virginia. The Dukes are ranked 15th in the nation.

This is the 10th time in 11 years the Deacs have made the NCAA Tournament, with the 2010 season being the only aberration.