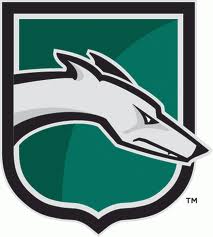 For better or for worse, college basketball is back. It's hard to believe we're already 75% of the way through the football season but it's that time again for the sneakers to hit the hardwood and for the Wake Forest basketball team to get back out on the court.
The team has been practicing for around a month and they are desperate to get the taste of last year's 8-24 record off their breath. Everyone around here knows what the Deacs are dealing with (8 scholarship players, the attrition from last year, Ty Walker ineligible until the spring semester, etc.) so this post is a focus on tonight's matchup with the Loyola Greyhounds from Maryland.
Click through to view an in-depth analysis of tonight's season opener for the Demon Deacons

Well let's go ahead and knock out the most important question surrounding this game. No, it's not if Wake will win or not, it's if the Greyhounds will in fact come down from Maryland in a...wait for it... 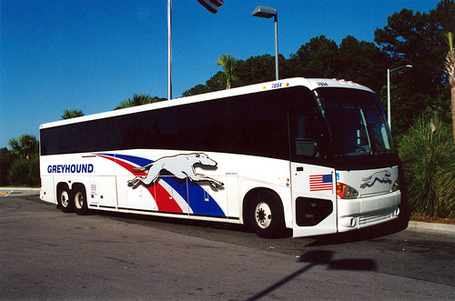 Now that the important stuff is out of the way we can turn to the minutia around the actual content of the basketball game: 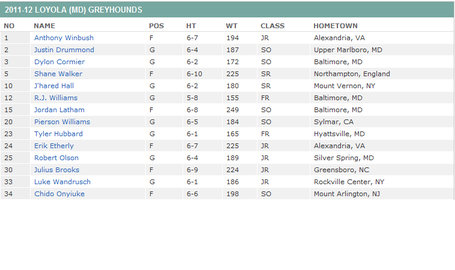 The Greyhounds got their season underway last week with an 83-71 victory over Indiana (Pa.). Erik Etherly lead the way for Loyola with 22 points in 29 minutes. They out-rebounded the exhibition opponent by a healthy 35-27 margin, but were outscored in the paint 35-27 and turned the ball over a lot with 19 total for the game. Loyola also showed an interest in getting shots from the perimeter as 22 of their 55 shots (40%) were from outside the arc.

The Greyhounds do return a lot of depth from a decent team last year and lost only one senior to graduation. It will be interesting to see what sort of game plan Coach Patsos attempts to implement as the Deacons appear to have a height advantage on the interior, but it remains to be seen what kind of presence the Wake big men will bring. If the Greyhounds can get the ball down low and establish a solid rapport inside, both getting to the basket and grabbing boards, Wake will be challenged by a scrappy team who last year was a fantastic offensive rebounding squad.

If Loyola decides to move more to a motion-type offense, it will be intriguing to see what kind of defense Coach Bzdelik comes out in to counter an offense equipped to fire off shots from outside as six Greyhound players recorded a made three pointer in the exhibition performance.

Wake Forest's starting lineup will likely remain the same as the one which sparked the Demon Deacons to an 82-43 exhibition against an over-matched Ferrum team.

1. Wake Forest needs an intense start to the game and to come out firing on all cylinders: The players have been saying that the loss last year against Stetson was at least a little bit attributable to the mindset entering the game. Well this year there is no excuse for taking any team lightly if you're Wake Forest. Coming off a season where a team has lost 24 games should provide a mental boost for Wake since they know that every team must be taken seriously. Loyola is a better team than Stetson was last year (much, much better) and Wake lost to the Hatters by 10 in a game everyone wants to forget. Wake needs to get off to a good start so no doubts start creeping in about losing the season opener for back-to-back years. If Wake can stretch out a double-digit lead in the first half it should be smooth sailing, but if the Greyhounds can stick around and are close or leading at halftime the Deacs could be in a lot of trouble.

2. Controlling the glass: Getting rebounds is going to be a challenge this year for Wake. One look at the roster reveals that the Deacons don't have much height in the first place, and the height that they do have is concentrated in 4 players. Wake needs to crash the boards and win the rebounding battle against a Loyola team which should be out-sized but not necessarily outhustled. McKie will be good for a double-double in this one, but he needs help from Carson, Nikita, and freshman Daniel Green for the Deacs to put down a Greyhound threat. Whoever wins the board battle is going to have a huge upper hand as the game progresses.

3. Limit turnovers: Both teams have an inclination to be sloppy with the basketball and turn the ball over. Watching Wake Forest at stretches last season was a comedy of errors (i.e. playing VCU where Wake seemingly turned the ball over 10 times in a 5 minute stretch in the second half) and there's no reason to believe that turnovers will have been completely eradicated from Wake's offensive repertoire. Wake turned the ball over 15 times against Ferrum and still won by 40. This is not going to happen tonight. If the Deacs turn the ball over 15 times and lose the rebounding battle, it's a pretty good bet that Loyola will be leaving the Joel with an upset victory.

Despite all the troubles the Deacs had last year and the fact that no game Wake plays this year is a guaranteed win, I truly believe Wake will win this one. McKie and Harris aren't going to let the Deacons sleepwalk through this one like they did against Stetson last year and I think this leadership is going to make the difference. As I mentioned earlier, I expect McKie to get a double-double (somewhere in the 18 and 11 range) and I think CJ is going to be able to slice down the lane at will to get to the basket. Once this happens and Loyola starts to collapse the defense, Wake will be better equipped to run the motion and weave that we saw in the exhibition.

Wake's going to run into trouble if they get off to a slow start and can't keep Loyola from getting second chances on the offensive side of the ball so it's a must for the Deacons to grab an early lead and run away with it. I think the Deacs will be up by 8 to 10 at the half before holding off a small second-half run and winning by 14 points.

As always, comments/criticisms/corrections/concerns are all welcome and encouraged. I'm looking forward to tonight's game, even though I'll be missing it as I'll be on the road to Clemson to watch the football team battle for the Atlantic Division crown tomorrow.