Examining the rivalry(?) between Wake Forest and North Carolina football

Share All sharing options for: Examining the rivalry(?) between Wake Forest and North Carolina football 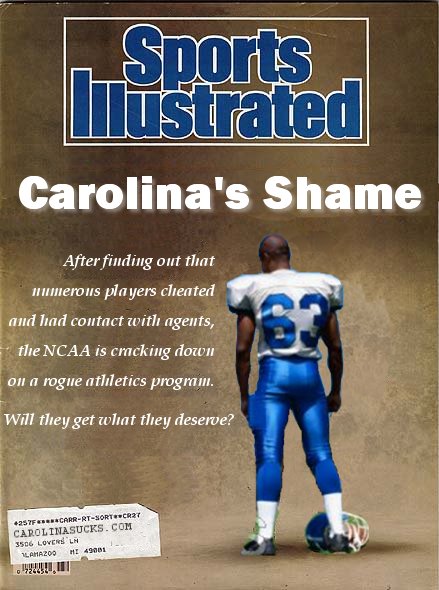 Do current Wake Forest players feel the same disdain that I feel for the Tar Holes???

My point is that it has been a LONG time since Wake Forest defeated UNC at Groves Stadium 37-10 on October 27, 2007. What a glorious day that was. The Deacs rode an Aaron Curry TD on defense, and the remarkable Kevin Marion 's ability to kick return to a thorough beatdown of the Tar Ho...erm Heels.

I was a high school senior at Mount Tabor, and now I am a college senior at Wake Forest. This is the football game that I have looked forward to the most in my time at Wake Forest. Yes there have been many bigger games for Wake Forest since then (and one or two from UNC), but to me this is the most excited I have been for a game on Saturday.

Read why after the jump.

Growing up in Winston-Salem as a Wake Forest fan, one would assume that I had many fans around me that pulled for Wake Forest. Oh how wrong one would have been. Carolina blue has, and will always be the team around here for bandwagon fans to jump on. For people that are not from North Carolina, Duke is the most hated team in the state, but they just don't understand. Only those that experienced the constant mocking and ignorant cries of UNC fans whenever they won a sporting event can commiserate with me.

Of course there have been basketball games between the two schools since I have been a student here. Somew were won by Wake, and some were won by North Carolina, but because of the way the divisions broke down with the expansion of the ACC, this is the only time in my undergraduate career that I will see Wake Forest play North Carolina in football. It's a damn shame that this is the case, and perhaps an article for another time, but it is the case for now and we must live with it (...and I digress).

The main point of this article is whether or not Wake Forest vs. UNC is still a rivalry in football?

Almost every Wake Forest fan will claim that of course it is a rivalry. Some UNC fans will say that it is, while others will say that only Duke is their rival, while even more will claim that it's almost basketball season. I of course believe that this is a huge rivalry, and one that almost everybody that I grew up with went to, whether it was at Groves Stadium, or Kenan Stadium.

The times have changed, and in the four years since Wake Forest has played North Carolina on the gridiron, the Deacs have made a conscious effort to recruit the states of Florida and Texas hard. This has obviously been successful for the direction of our program, and has also created a natural rivalry with Florida State for the guys that weren't even a blip on the Seminoles radar.

What has it done to the rivalry against North Carolina though?

Playing a team after a break of four years certainly makes it lose its luster, especially for kids that did not grow up in the state and understand the natural rivalries in place here. I am worried that it is just another game for the players, and I don't want it to be that way.

I want them to feel the same hatred that I feel every time I see that awful baby blue color.

I want them all to revel in the fact that UNC-Cheat allowed at least 9 major NCAA violations to happen right under their nose and refuse to do anything about it.

I want our players to be as fired up over this game as they are going up against Florida State or Notre Dame, because this is our state to defend, and our pride is on the line versus an in-state opponent that looks at us as LOWF.

Of course the Notre Dame game in prime-time television is a HUGE game for the program, and I'm not trying to take anything away from that game. I am just very interested in whether or not the oldest rivalry in North Carolina (Wake Forest defeated North Carolina 6-4 on October 18, 1888 in the first intercollegiate football game played in the state of North Carolina) still holds the same meaning to the players as it once did.

I don't want it to lose that feeling that it once had, because after four long years, I still want to see us stomp those goats into the ground at Kenan Stadium and let it echo through all those empty seats!!!

I just hope that in the creation of the new ACC (which is absolutely necessary), that we don't leave behind what matters the most to the fans: the rivalries and traditions with schools around them.

This is the 104th all-time meeting between the Tar Heels and the Demon Deacons, with the Heels leading the series 64-37-2.

I want your comments on this article as Wake Forest (or UNC fans) as to why or why not this is a rivalry. Really I just want everybody to share stories about how much they hate North Carolina.

Breakdown by Decade (stats are from UNC perspective)