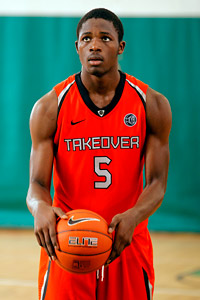 Arnaud Moto, the small forward from Alexandria Virginia, has committed to Wake Forest, according to sources. Quick player breakdown following the jump. He is a 4 star recruit, and the 75th best recruit in the country according to ESPN.

Strengths:
Arnaud is productive in so many areas and it all starts with the high motor he plays the game with every time he steps out on the floor. He's a versatile small forward on the perimeter with long arms and tremendous athleticism. In the transition game he finishes using his explosiveness. Offensively, he's a slasher and a solid shooter to 20 feet. Moto's a kid who is wired to score. He's also a great rebounder for his position with the ability to run with the ball and lead the break as long as his decisions stay solid. Watch his defense because he loves to defend and is capable of doing it almost anywhere on the court.

Bottom Line:
Once a sleeper, Arnaud's a classic versatile hard working player. Because of how aggressive he plays along with his good skill level and an improved body frame his recruitment is blowing up and he was just inserted into our Super 60 rankings. He is special because of the his approach to practice/games, desire to defend along with improving offensive skills. Team Takeover plays with savvy, toughness, and continuity and Moto is their catalyst at both ends.